All of our surroundings give out sound or vibration and the philosophy behind this project is to visualise this form in order that we can better understand its beauty. Cymatics itself is the scientific process of visualising this sound. In its raw form, this is shown by vibrating a simple membrane – such as sand or water – and recording the complex shapes that form. This philosophy has a relatively young existence, beginning yet is becoming ever more popular in the current climate – with the list of both scientific and non-scientific applications growing daily. This scheme takes upon this research and uses it to interpret a form and function appropriate to that of Burning Man

From the microscopic to the galactic our universe consists of remarkable patterns and music – or sound – is of course no different. However these patterns are usually only heard and not seen. All around us things are vibrating, changing and shifting, creating these noises and patterns and Cymatics is like a window looking into this. It enables us to reveal these patterns that we couldn’t normally see. Cymatics itself allows one to bring matter to life with the use of sound, in turn creating forms in both two dimensions and three.

By considering that sound can not only affect matter, but also can cause form: Moments of these vibrations and sounds have been modelled in an isotropic 3D form digitally – essentially allowing one to create a pavilion that represents a specifically frozen point in a moment of music. This is not only a visualisation of sound, but an exploration of how we can share and form meaning from it. Shown here are physical reinterpretations of this science devised to create something quite extraordinary.

Each module has it’s own light which projects the Cymatic patterns onto the playa and onto itself. Adding a symbolic meaning to light, it tries to connect the pavilion and playa as one, rather than just illuminating a form. A light will also run down the centre of the whole structure, projecting the same patterns and illuminating the interior area – creating a welcoming womb like environment aimed at encourage engagement. 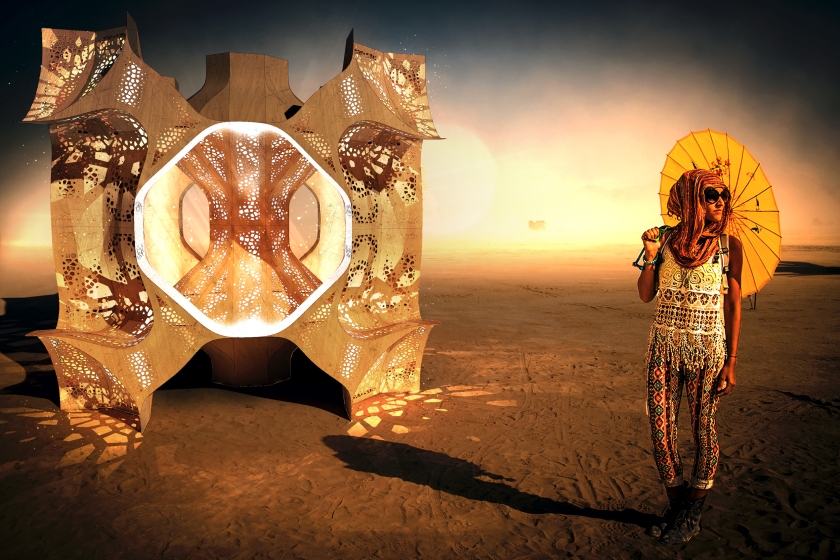 The scheme has a human scale to it which as such encourages interaction. It provides a place for rest from the playa and as such is appropriately designed. Seating areas are present on each corner to over look the festival and an internal area gives shade from the sunlight during the day.

Further information about the science of Cymatics and how it has been interpreted to culminate in this proposal for Burning Man can be see by reading more below:

One thought on “House of Cymatics”