Reciprocal Observatory is a dome‐like structure which is open to the elements, relying only on the density of the structural members to offer a gentle screening from the sun, casting playful, intricate shadows on the ground during the day and framing the starry sky at night.

A reciprocal structure is formed by three or more beams supporting each other through forces of friction. Each beam plays a paramount role in the integrity of the whole structure: if one of them is removed, the entire edifice collapses.

Reciprocal Observatory has the form of a geodesic dome assembled with beams arranged in a reciprocal formation. Each hexagonal cell of the dome is clad with a smaller hexagonal structure which repeats itself four times while proportionately decreasing in size. As it moves away from the main frame, it forms a spiral which is intended to capture the attention of the burners and draw them inside, determining them to spend time and interact with the structure. 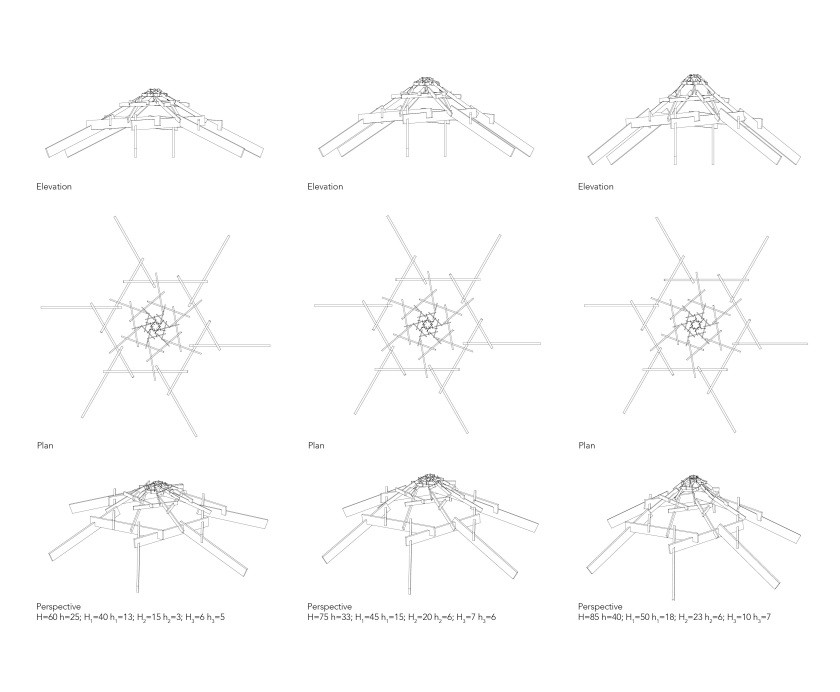 Assembly is done by simply interlocking the members together, without the need of additional fastening systems. Anchoring to the ground will be made with a base ring which will be pinned to the playa with Hurricane ground anchors. Rebar stakes will be used to anchor the structure to the timber ring which will be covered with sand.

The construction is made out of timber breams the length and thickness of which decreases as the number of iterations increases. The main frame would be cut in shape through the process of milling while the cladding system can be achieved through laser cutting. The beams would be transported to site and assembled at the designated location on the playa. 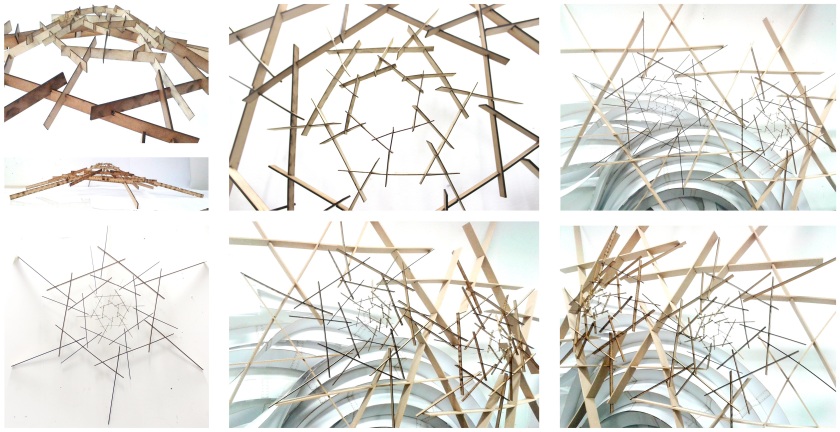 Reciprocal systems have been used by the Native Americans in the Great Plains to create tipis, their main form of dwelling. In this way Reciprocal Observatory becomes also a mirror to the past, filtered through the creative lens of self‐expression.

Thus, Reciprocal Observatory wants to be a place of reflection and meditation over an idealised model of our society as it develops in time and a space of exploration and discovery of the natural beauties that surround us.

To arrive inside the structure, visitors would have to find one of the five cells that is left unclad and crawl in. Once surrounded by the reciprocal dome, burners are encouraged to touch and explore the intricate formations cladding the sculptural structure.

By openly displaying its structure, Reciprocal Observatory intends to make burners reflect on the role each individual plays at the festival and in the wider context of our society. Moreover, the recursive geometry of the cladding system creates links with the outside world and the cosmos by projecting outwards and framing views of the sky while mirroring the universe as we know it.

Architectural assistant based in London, passionate about ecclesiastical architecture, photography and travelling. View all posts by Irina Ghiuzan

One thought on “Reciprocal Oservatory”