“…the main task is to unfreeze architecture- to make it a fluid, vibrating, changeable backdrop for the varied and constantly changing modes of life…”

Reciprocal systems can be used to create a wide variety of movable structures based on pin-joint assemblies, especially in planar form.

One of the most widely known reciprocal kinetic structures is the iris diaphragm which uses four or more elements hinged at their ends with pin joints to generate a sliding motion for opening and closing. The elements join one another at different points along their spans and these intermediate points of connection can be used to determine new kinematic behaviour. 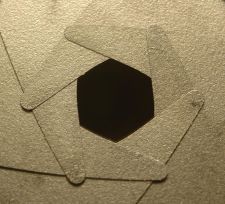 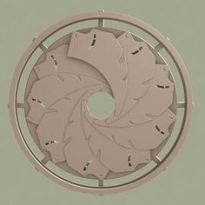 Iris diaphragm with 6 and 8 elements

Jean Nouvel’s facade design for the Institut du Monde Arabe is based on the iris mechanism, with aluminium diaphragm panels employing squares, circles, stars and polygons to generate decorative patterns through rotation. This light-responsive south facing facade uses a photoelectric cell to adjust the admission of natural light by the opening and closing of the mobile diaphragm. 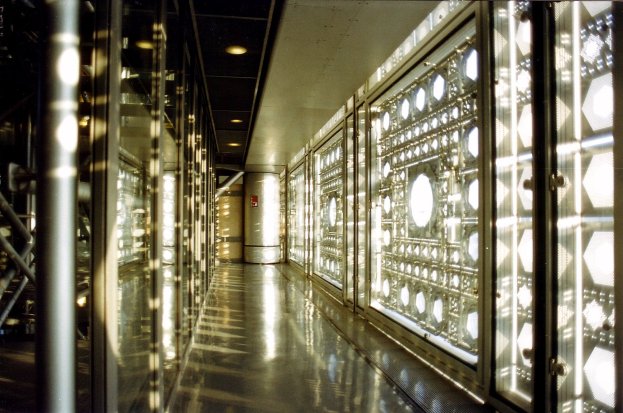 Calatrava’s project for a restaurant in Zurich has some similarities with the principles of retractable reciprocal frames. The roof structure is composed of nine metal and glass tree-like elements 12m high. Each of the nine columns is mechanically operated and folds simultaneously with all the others to provide shelter for the restaurant underneath. 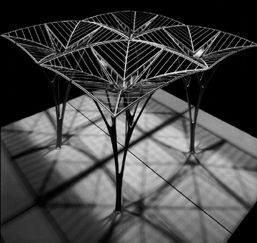 Model for a restaurant in Zurich by Santiago Calatrava

The idea of a retractable roof which operates similar to the iris of the camera lens was first patented in 1961 by Emilio Perez who proposed a dome built of 3D curved segments which retract. The segments twist simultaneously and create a circular opening at the top. 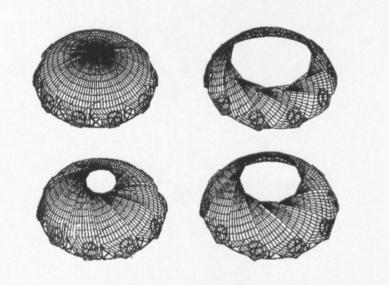 Patent for a retractable dome by Emilio Perez

However, issues such as cladding materials, the changing geometry due to the retraction, design details of the hinges, eliminating the danger of progressive collapse, drive mechanisms which will provide simultaneous reaction to the beams and the cladding as well as overall construction detailing have to be considered and developed.

Chuck Hoberman’s research in the field of mobile and folding structures can have a remarkable impact on the development of kinetic reciprocal structures. His unique approach in the field of transformable design has created created objects that simulate the behaviour of living organisms, fostering a dynamic relationship between structure and user.

The Iris Dome has a fixed perimeter with a centre retracting in a smooth radial motion. A lamella dome with a geometry of interlocking spirals, the structure is based on a Vierendeel grid which carries the load by bending action rather than by axial forces which makes it similar to a retractable reciprocal structure. The main difference however is that the segments which form the Iris Dome are an assembly of pairs of structural elements connected with hinges at their midpoints which move like scissors.

Scissor-like movement is the main generative force also for the Hoberman sphere. The unfolding structure resembles an expanding geodesic sphere which can reach a size up to five times larger than the initial one. It consists of six great circles, each made of 60 elements which fold and unfold in a scissor-like motion. There are also 60 nodes which give rigidity to the structure and prevent the circles from expanding further into elliptical shapes.

Architectural assistant based in London, passionate about ecclesiastical architecture, photography and travelling. View all posts by Irina Ghiuzan