The installation centers around the natural forms of feathers and pine cones, both being significant symbols in Native American culture, specifically relating to the Agai-Dicutta Numu.  Feathers were often used as an expression of a certain virtue or to reflect a certain individual or significant event. As such feathers were viewed in a similar manner to a gift from a high official, representing a link between the individual and divinity.

The sculpture starts in the form of a feather to reflect on the link between man and divine. The bright colours painted across the platforms represent those painted across the barbs of the modern feathers used in Native American ceremonial dress and ornamentation.

As burners ascend they will make their way up the vane of a feather they will complete their own initiation, drawing similarity between the great events that feathers were rewarded for in the past. As the platforms open they will begin to transform in shape to bear visual resemblance to pine cones.

The pine nuts are important in particular for the Northern Paiutes to survive the winter; and have their own festival in the third week of September. The change in form will reflect the process of change from receiving a symbol from the divine, to receiving bountiful harvest and personal fulfillment. The lighting will help to accentuate the fluctuations in shape throughout the day and night, representing the omnipresent divinity and how it can be seen in many different forms of nature.

The piece will be both physically and visually interactive, with a changing form that will alter over the course of the festival. Burners can twist the colorful platforms around their central core allowing them to climb to the higher levels. As they do so they will be able to read messages of wisdom from other burners and leave their own along the way. The bridging links are fixed and thus can be used by the burners to sit and relax, observing the surrounding playa. The structure can also be used as a shelter, by rotating the platforms to create shade from the sun’s direct heat as well as forming a barrier from wind.

Special holes carved through some of the platforms will facilitate themselves as climbing holds to aid burners on their ascent. The bridging links are fixed and thus can be used by the burners to sit and relax, observing the surrounding playa. As the platforms are rotated, light will interact with the sculpture in different manners, pouring through the holes and creating intricate shadows. At night, the project will illuminate and create a light show, which will make the climbing possible even during night time. 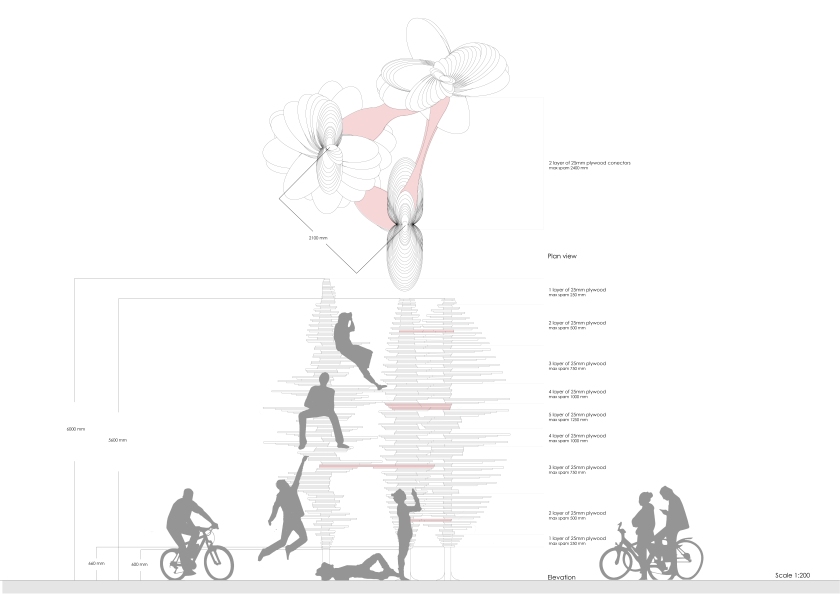 The varying thickness platforms will be comprised of 12 and 25 mm layers of plywood, depending on it’s span and form. In each platform will be a ring of 10 mm acrylic between the top layers allows for LEDs to cast out a unique visual form at night. Metal ball bearings will separate each platform facilitating the change of form as it is used by burners.

All this will be held up by steel tubes measuring between 5 and 6 meters in height with a diameter of 160mm. The steel tubes will be welded to a metal plate buried in the sand and secured with ground anchors. The feathers are also structurally supporting each other, through the 4 bridge link, made from the same plywood.

One thought on “Ca’sah Nanah da gai [Feathers of Initiation]”