Very inspiring conference today at the Building Centre.
The conference runs for 3 days (21st until 23rd of February). It brings together the work of architects, engineers, manufacturers, product designers, academics and artists to explore the importance of prototypes in the delivery of high quality contemporary design. Placing a particular emphasis on research and experimentation. Prototyping Architecture forms a bridge between architecture, engineering and art, with exhibits that are inventive, purposeful and beautiful.

Some highlights of today’s talks:

– Sean Ahlquist‘s research MATERIAL EQUILIBRIA, which consists in the delicate and simultaneous relationship of articulated material behavior and differentiated structural form. This specific study investigates the variegation of knitted textiles, a jacquard weave of shifting densities, as it influences the structuring of a tensile spatial surface 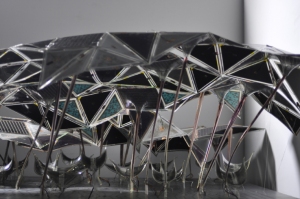 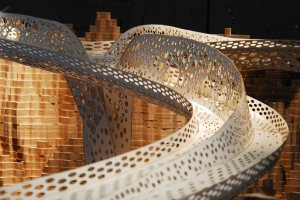 – Maquette’s, models and full-scale sample productions in the exhibition

The Institute for Computational Design (ICD)  at the University of Stuttgart are collaborating on a new temporary research pavilion. The focus is on biomimetic design strategies for performative morphology in architecture, which form the basis of an investigation into integral structural, spatial and material systems.

As a first step physical models have been used to develop and refined the filament wrapping logic / syntax. In a first wrap (white yarn representing glass-fiber) the spatial enclosure of the pavilion is defined; in the subsequent wraps (black yarn / carbon-fibre) the fibres are placed according to the trajectories of the forces in the system. Through continuous wrapping and accretion of fibers a self-supporting and external load-bearing structure is generated. 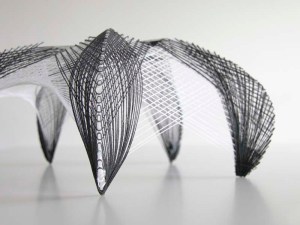 Then the frame has been set up in a temporary weather enclosure during the time of fabrication. 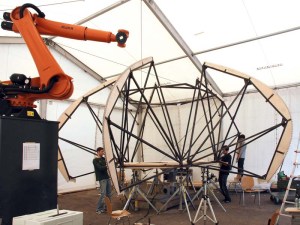 During fabrication, the frame rotates while the robotic arm distribute the fibre. 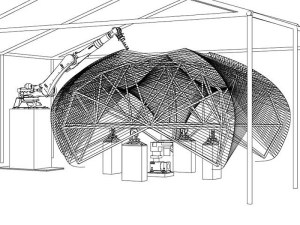 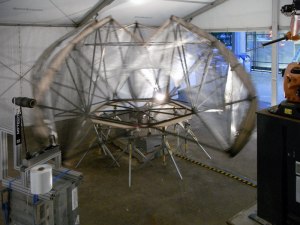 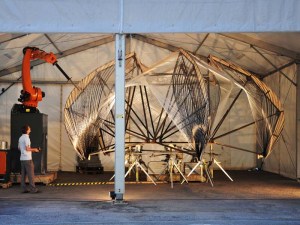 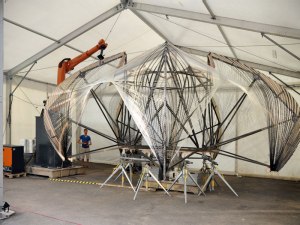 Today we are coming at you with another fabrication studio that has allowed students and professors to delve into the trending world or architectural fabrication.  Over past couple years using and understanding the dynamics that tools and the modeling programs can bring to the world of architecture is increasingly important.  Digital Fabrication actually in itself has become a craft, as professor Santiago Perez and his students at University of Arkansas, Fay Jones School of Architecture know all too well.  Check it out after the JUMP!

Robotic arms, like many other digital fabrication tools,  are getting increasingly accessible but these ones have more potential than the others (3D printing, laser-cutting, CNC..etc) as it can do all of it and more. It can cut, print in 3D or even fold!

Below are couple examples of Robots being use to fold, print or fabricate components which could be used as building block.

First, lets start with London, ROBOFOLD offers workshops, and rents out their large 6 axis Robotic Arms which are mainly use for Folding Metal sheets. 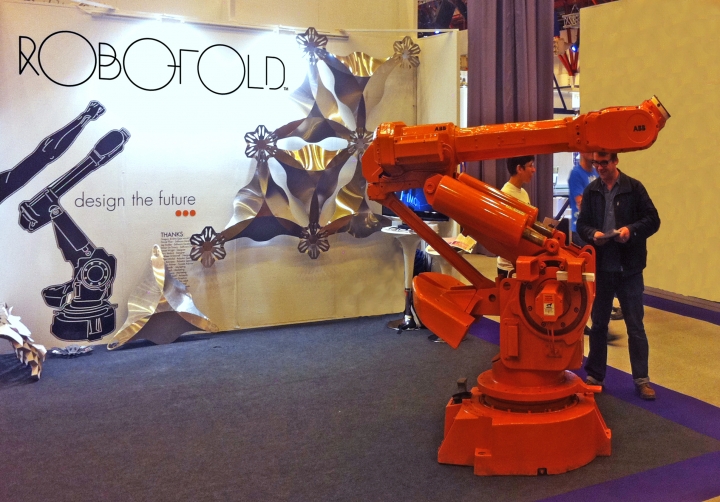 Above: Connection between the Grasshopper Interface and the Robots through Lobster

In Sci-Arc’s Robotics Lab   Zachary Schoch used robots to spread threads around a frame which he later removes to leave the amazing structures shown below. 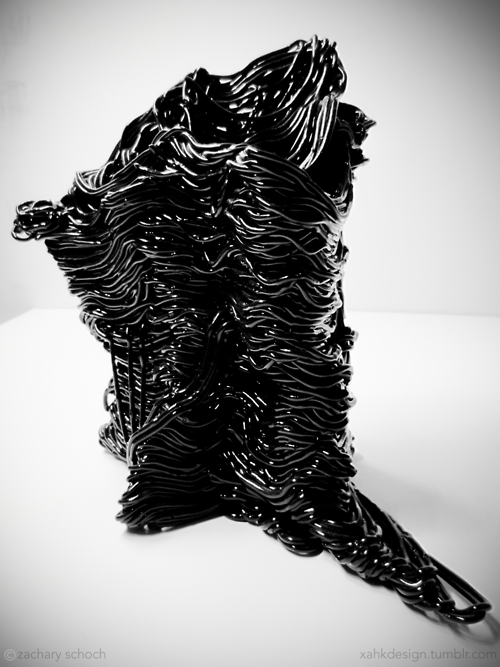 Above: Video of Zachary Schoch’s Masters Thesis at Sci-Arc

In Vienna,  Robots in Architecture is an association set up by Johannes Braumann and Sigrid Brell-Cokcan which owork with a KUKA KR 5 SIXX R650 Robotic Arm to draw or punch holes. They also use Grasshopper but with the KUKA plugin. Below are couple images shown on their website: 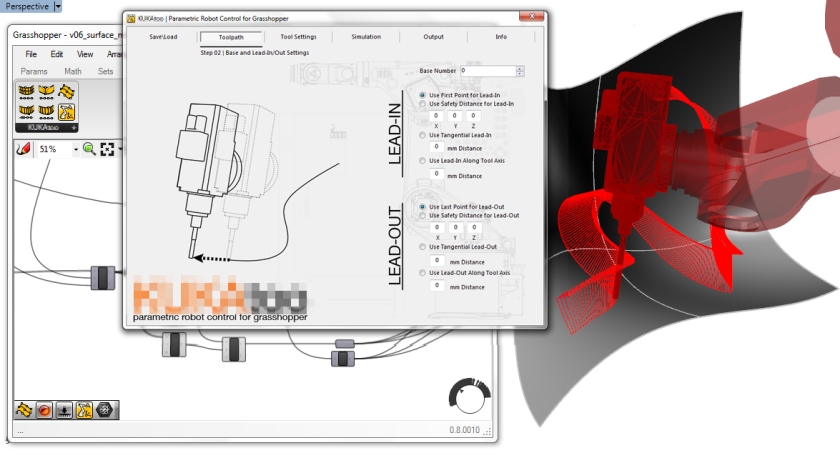 Above: The Kuka Grasshopper GUI 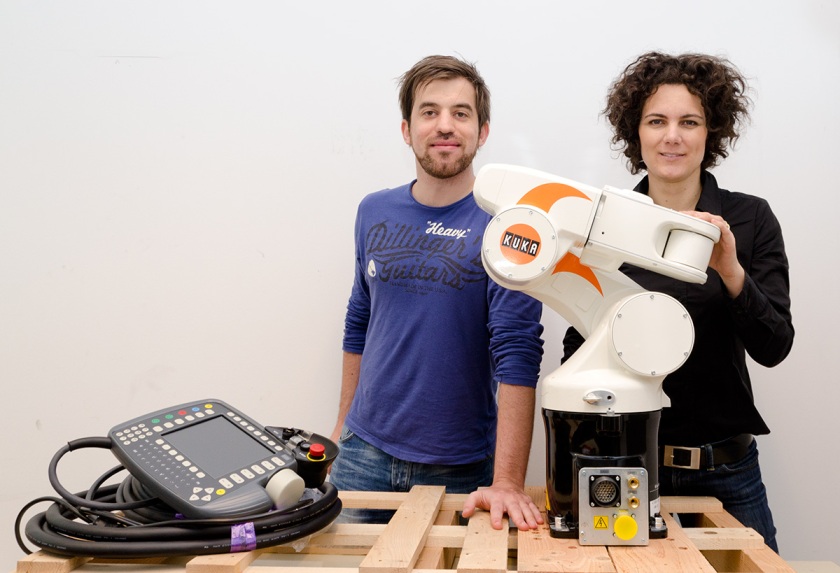 Above: Sigfrid and Johannes with the Kuka Robotic Arm

Above: Video of Robot in Architecture’s Workshop at the Design Modelling Symposium 2011, Berlin.