Hello WeWantToLearn community. We’re going to Burning Man in less than a month!

Our project this year will be a physical manifestation of our collective dreams and is called Tangential Dreams.  It is a seven meters high temporary timber tower displaying inspiring messages from around the world, written on a multitude of swirling “tangents”.

We need your help to realise our project! There is only three days left to collect the missing £5,000 on our crowdfunding campaign to finance the many expenses associated with the creation of such an ambitious project.

Please click on the image below or use the following shortlink to share/help – everything helps: http://kck.st/28KlbPk 🙂 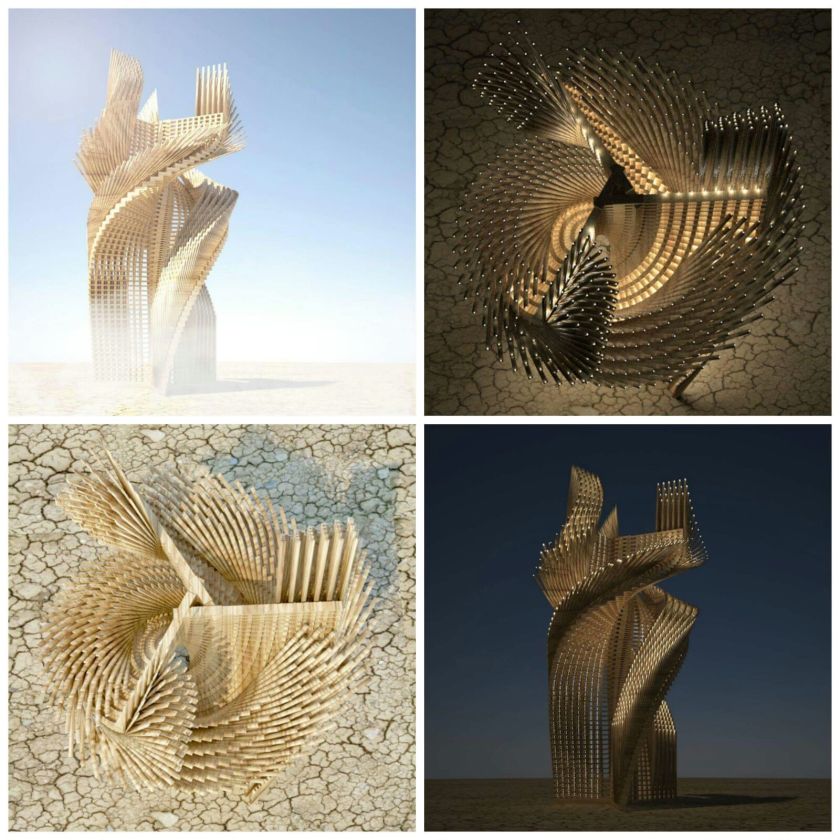 The project is a climbable sinuous tower made from off-the-shelf timber and digitally designed via algorithmic rules. One thousand “tangent” and light wooden pieces, stenciled with inspiring sentences, are strongly held in position by a helicoid sub-structure rotating along a central spine which also forms a safe staircase to climb on. Each one of the poetic branches faces a different angle, based on the tangent vectors of a sweeping sine curve. In line with this year’s theme, the piece is reminiscent of Leonardo’s Vitruvian man’s movement, helicoid inventions such as the “aerial screw” helicopter and Chambord castle helicoid staircase as well as his deep, systematic, understanding of the rules behind form to create art. From a wave to a flame all the way to a giant desert cactus, the complex simplicity of the art piece will trigger many interpretations, many dreams.

The art piece attempts to maximize an inexpensive material by using the output of an algorithm – (the value of the piece being the mathematics behind it, as well as the experience, not the materials being used). The computer outputs information to locate the column, sub-structure and tangents.  We believe digital tools in design are giving rise to a new Renaissance, in which highly sophisticated designs, mimicking natural processes by integrating structural and environmental feedback, can be achieved at a very low cost. We worked very closely with our structural engineer format, sharing our algorithms, to give structural integrity to the piece and resist the strong climbing and wind loads. There are now three “legs” to our proposal, each rotated from each other at 60 degrees angles around a central solid spine, to ensure the stability of the piece, similarly to a tripod. The tangents are not just a decoration, they act as a spiky balustrade to prevent people from falling.