Providing shelter, nutrients, a place to hunt, coral reefs exist in less than 0.1% of our oceans, yet they play host to a quarter of marine species. A wondrous setting for letting the imagination wander, as well as a poignant reminder of the frailty of our beautiful planet, Black Rock Reef invites you to suspend your disbelief, and find your spot in the anemone.

Anemones, more than most components of the reef, share a collaborative relationship with their inhabitants. Their tentacles stun and collect tiny organisms for fish to feed on, and in turn, the fish defend the anemone and waft aerated water past its tentacles with their fins. Once a clown fish has found its anemone, it will never stray farther than four inches from its comforting fingers until it dies.

I hope that the soaring, flexible limbs of Black Rock Reef will prove equally irresistible to the inhabitants of the Playa. The vibrant beacon of color on the horizon serves to draw visitors in from afar, and the intricate arrangement of organic spaces dare further exploration on arrival.

The graceful order of the woven elements provide an incredibly tough surface that is inherently climbable, yet filigree and visually lightweight. Silhouettes of daring explorers who have ascended towards the canopy are visible from afar, inviting others to participate. The curved forms create multiple inhabitable spaces through their relation to one another, the Black Rock Reef has as many inspiring destinations in its topography as your imagination will allow.

Interactivity
Interactivity is integral to the Black Rock Reef. Choosing and then developing a gridshell system has been an exercise in creating a structure that invites and supports climbing and exploring safely.The permeability of the structure makes climbers’ silhouettes clearly visible from afar, a clear visual tutorial for passers by as to the exploratory opportunity offered by the Black Rock Reef.
On closer inspection, the collection of bulging towers lend infinite surfaces to be explored, and each tower’s opening at its base allows the gentle bulges to be experienced from the other side of the skin. A unique interaction of spaces occurs, and people relaxing on a gentle slope may find themselves to be witness to a dramatic ascent of an overhang, through the apertures in their seat!
The interior of the cores also serve as ladders to the canopy of the reef, which is an enclosed bowl with spectacular views across the playa, with space for several simultaneous inhabitants. The gently sloping of the canopy perimeter serves to gently enclose even the wobbliest burner, without intrusively caging, or breaking the connection with the external environment.
An optional in-situ burn of the Black Rock reef would prove spectacular, with the woven structure allowing for an air fuelled ferocious burn. Burn safe methods of colouring the laths would be sought, if a burn was planned. 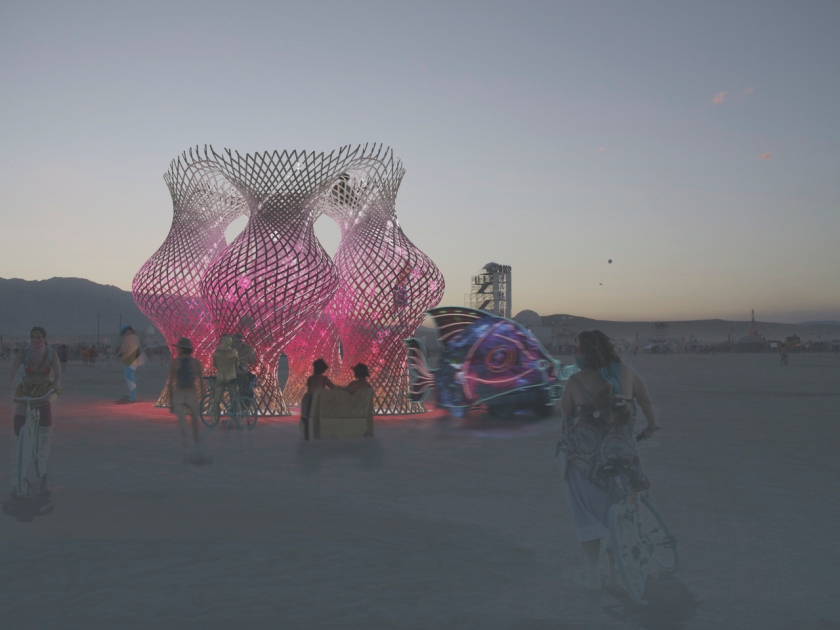 Evening at the reef
At night the towers are lit from beneath, creating a colourful beacon visible from afar. The intricate gridshell surfaces cast spectacularly kaleidoscopic geometric shadows.
As anyone who has been lucky enough to scuba dive at night with a torch will understand, the colour and form of the Black Rock Reef will really come to life at night, with dizzyingly complex shadow patterns cast against an uplifting splash of colour.