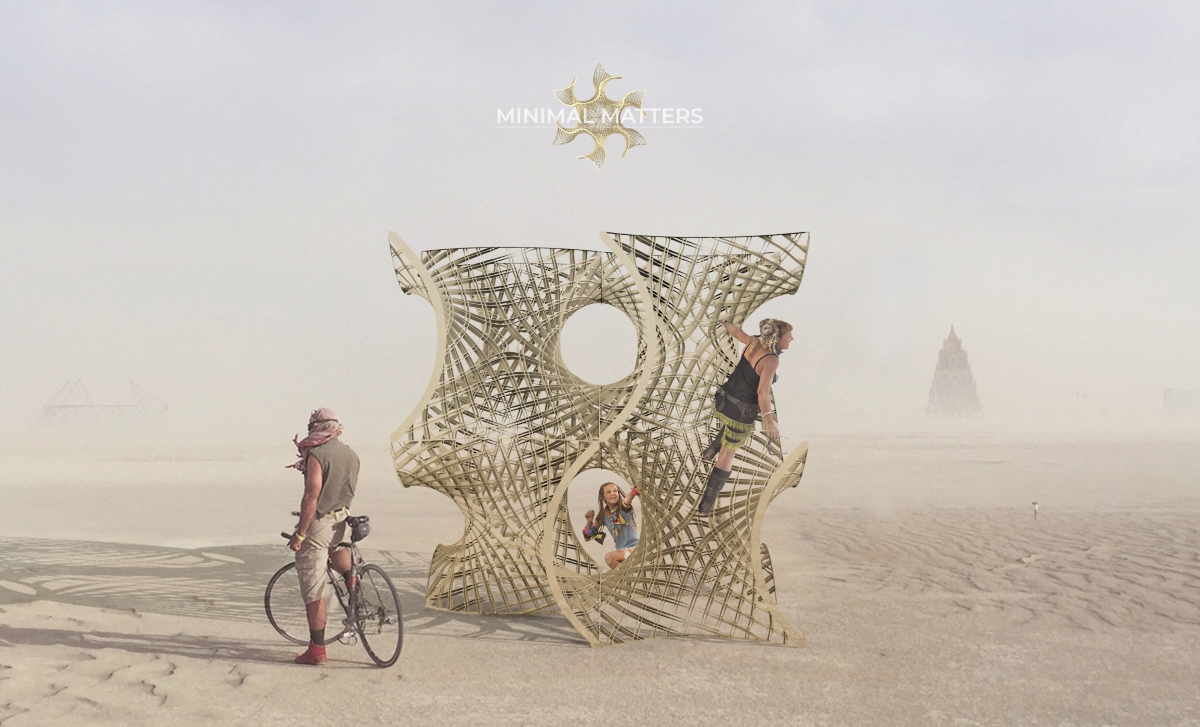 Through extensive research into the construction of grid shells, as well as differential geometry, I present a design solution for a complex grid structure inspired by the highly symmetrical and optimised physical properties of a triply periodic minimal surface. The proposal implements the asymptotic design method of Eike Schling and his team at Technical University of Munich.

‘Minimal Matters’ utilises the several geometric benefits of an asymptotic curve network to optimise cost and fabrication. From differential geometry, it is determined asymptotic curves are not curved in the surface normal direction. As opposed to traditional gridshells, this means they can be formed from straight, planar strips perpendicular to the surface. In combination with 90° intersections that appear on all minimal surfaces (soap films) this method offers a simple and affordable construction method. Asymptotic curves have a vanishing normal curvature, and thus only exist on anticlastic surface-regions.

Asymptotic curves can be plotted on any anticlastic surface using differential geometry.

(a) Planes of principle curvature are where the curvature takes its maximum and minimum values. They are always perpendicular, and intersect the tangent plane.

(c) The direction and magnitude for these directions vary between points on a surface.

(d) Starting from point, lines can be drawn to connect points along the paths of principal and asymptotic directions on the respective surface.

The next step is to create the asymptotic curve network for the Gyroid minimal surface; chosen from my research into Triply Periodic Minimal Surfaces.

As the designer, I can merely pick a starting point on an anticlastic surface from which two asymptotic paths will originate. It is crucial to understand the behaviour of asymptotic curves and its dependency on the Gaussian curvature of the surface.

Through rotational symmetry, it is resolved to only require six unique strips for the complete grid structure (Seven including the repeated perimeter piece).

The node to node distance, measured along the asymptotic curves, is the only variable information needed to draw the flat and straight strips. They are then cut flat and bent and twisted into an asymptotic support structure.

Eight fundamental units complete the cubit unit cell of a Gyroid surface. Due to the scale of the proposal, I have introduced two layers of lamellas. This is to ensure each layer is sufficiently slender to be easily bent and twisted into its target geometry, whilst providing enough stiffness to resist buckling under compression loads.

‘Minimal Matters’ aims to create an explorative, meditative and interactive experience for visitors. It is a strained grid shell utilising the geometrical benefits of an asymptotic curve network; digitally designed via algorithmic rules to minimise material, cost, and construction time.