Technology today is designed to fail. Products are made so that you will buy a new one after a pre-determined time. This is called planned obsolescence and is a widely accepted commercial concept within industrial companies.

The Phoebus Kartel  was a cartel of, among others, Osram, Philips and General Electricfrom December 23, 1924 until 1939 that controlled the manufacture and sale of light bulbs. It decided that it would limit the lifetime of a lightbulb to 1000 hours. Before this arbitrary and profit-driven decision, light bulbs could last for a very long time, a solid proof for that is the Livermore’s Centennial Lightbulb which shines since 1890. The 1000 hours rule was the beginning of an imposed large-scale planned obsolescence.

Above: The Livermore’s Centennial Lightbulb’s webcam

After the great depression, Bernard London thought that imposing planned obsolescence by law would bring prosperity to Americans.

Above: The toastalator by Brook Stevens

Without planned obsolescence, shopping malls would probably not exits and economic growth would not be as crucial as it it today to the economy.  In essence, economic growth does not attempt to make human life better, it just tries to grow for the sake of it. This growth is based on debt and on consuming products that are not necessary. As the economist and system theorist Kenneth Boulding once said: “Someone who believes that an economy that constantly grows on a planet that is finite is either mad or an economist, the problem is that we are all economists now.”

The Waste Makers, published in 1960 by Vance Packard is the first book on the topic.

Apple, largest public company in the U.S., gave a clear notice to its reseller when the IPOD battery would fail: “buy a new ipod“.  Apple was sued for that by consumers, the case was called Wesley vs. Apple. Apple lost the case and was forced to extend the warranty on the battery. Apple has no environmental policy for its products and tries to sell as many products as possible, not products that will last.

Epson adds microchips in some of their printers that counts the amount  of prints and breaks the printer after reaching a pre-determined printer. In fact, some freewares help you to reset the count so that you can use your printers more.

Electronic products that could have lasted much longer end up in illegal dump site in countries such as Ghana and Nigeria (have a look at the Agbogbloshie dump site on this BBC documentary). 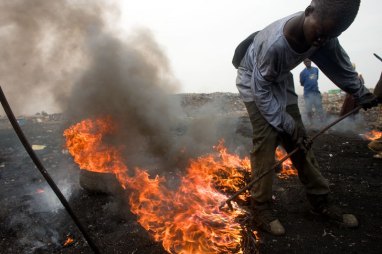 Above: kid looking for copper on the Agbogbloshie illegal E-Waste dump site, Ghana

The idea of creating “Open-Source” buildings from simple materials that can be made and improved by anyone and based on home-grown or widely accessible products is DS10’s answer to the tragedy of planned obsolescence. Similarly to open source software that can always be updated and maintained by the end user, the makers will not be at the sole mercy of a proprietary vendor. We will also look into temples, timeless monuments for spirituality and best counter example for modernist buildings, a theory which emerged around the same time as the Phoebus Kartel.

-This post is based on the documentary “The Light Bulb Conspiracy” by Cosima Dannoritzen. 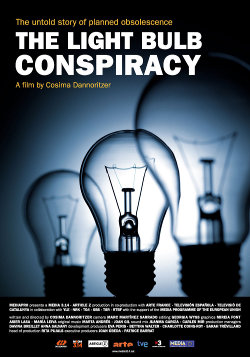