My study about a custom G-Code for FDM 3d printing geometries based on a central axis (not necessarily a straight line! – any curve would do). Rather than printing layer by layer horizontal sections that are uneven and inefficient in terms of travel time, the slices are consistent and always perpendicular to the central axes. Moreover the transition between layers – rather than being done from a single point through a vertical motion which is the traditional approach – is a continuous gradual motion upwards, the travel path resembling a spiral, thus improving efficiency. 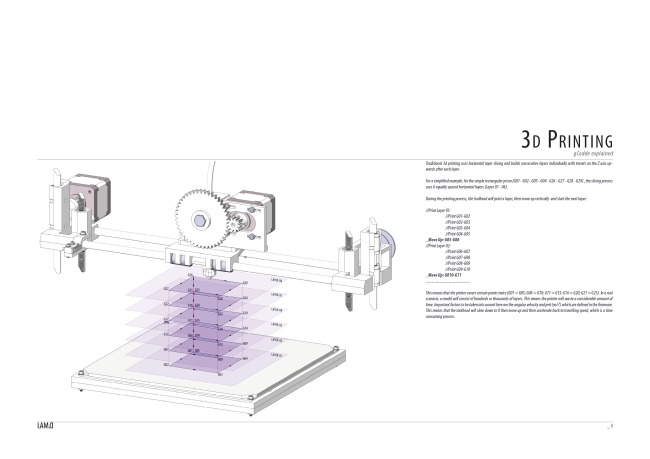 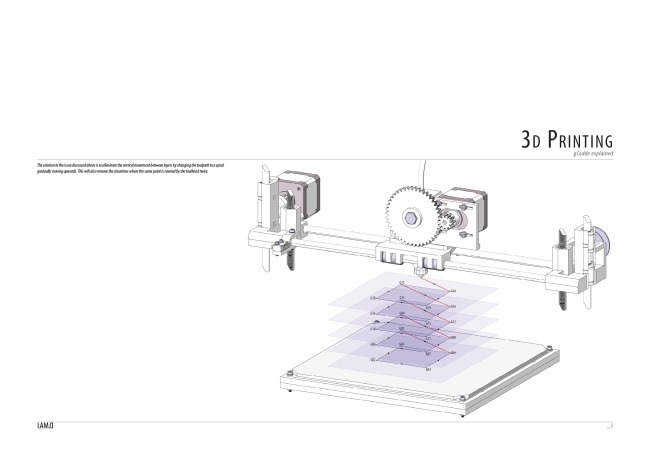 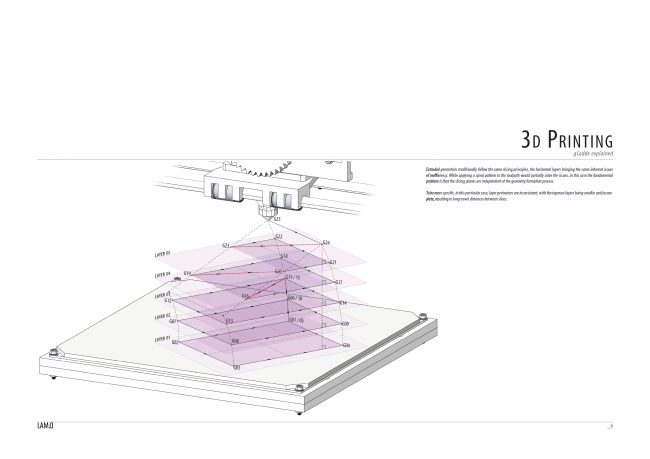 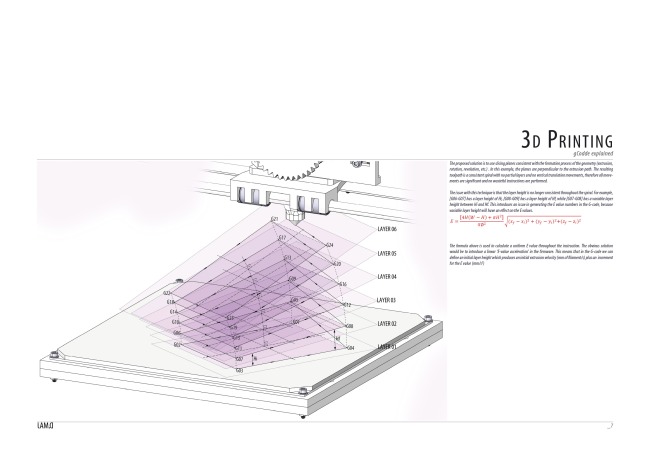 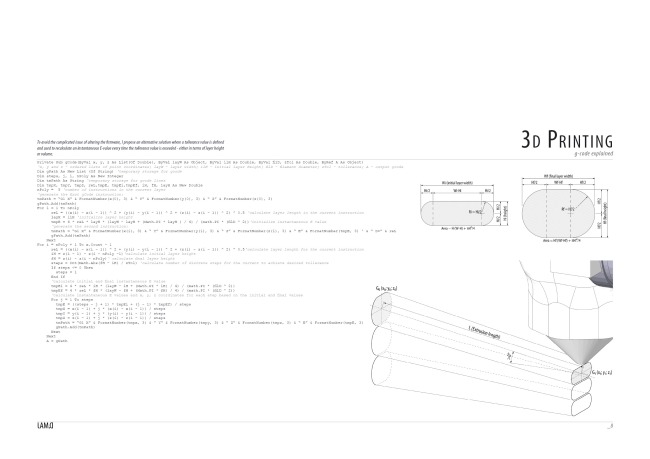 We just finished our last tutorials of the first term! Congratulations to all the students for the great three months and looking forward to the remaining two terms.

Students completed both briefs (brief01:systems and brief2A:festival) and are starting the case studies of events as part of our last brief (brief2B:realise).

Here are couple pictures of the projects we have seen during the last tutorials. Where do you suggest building the structures over the summer?

Another wonderful Thursday! Here are some pictures of the day. Keep it up guys, beautiful work.

Back in our studio and excited to see how students are tackling the brief this year. Here are some pictures showing the different systems that students chose for brief01 and some of the models that are already being produced.

We just finished our week at Grymsdyke Farm, Buckinghamshire. Ten students spent about two nights each working on their individual projects, building a 1:1 to 1:5 prototype using the available technology: a CNC Milling Machine (with RhinoCam), a laser cutter, a Z-Corp and a RepRap 3Dprinter.

DS10 would like to thank Guan Lee, Ed Grainge and Kate for their precious help and patience on the CNC, Jessie Lee and Keith McDonald for their great advices!

Below are some pictures of the week. 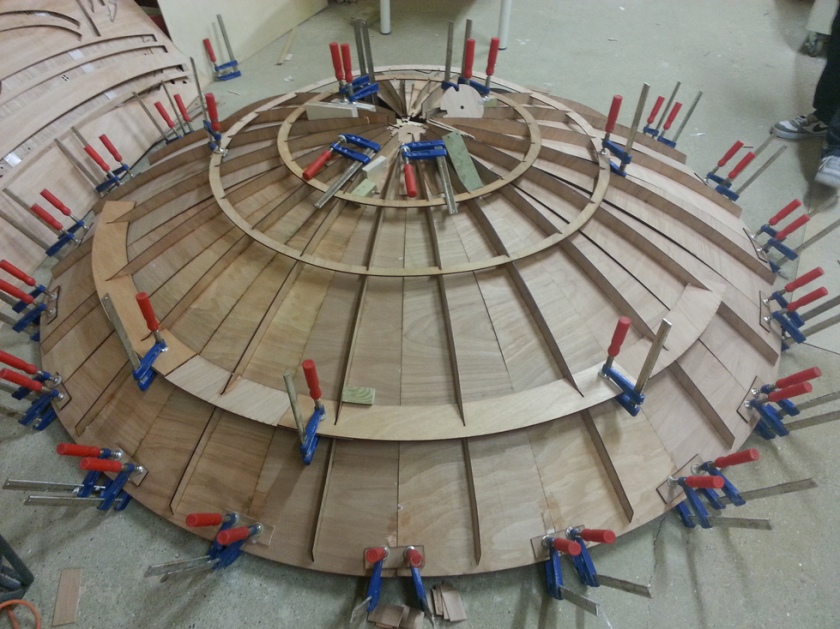 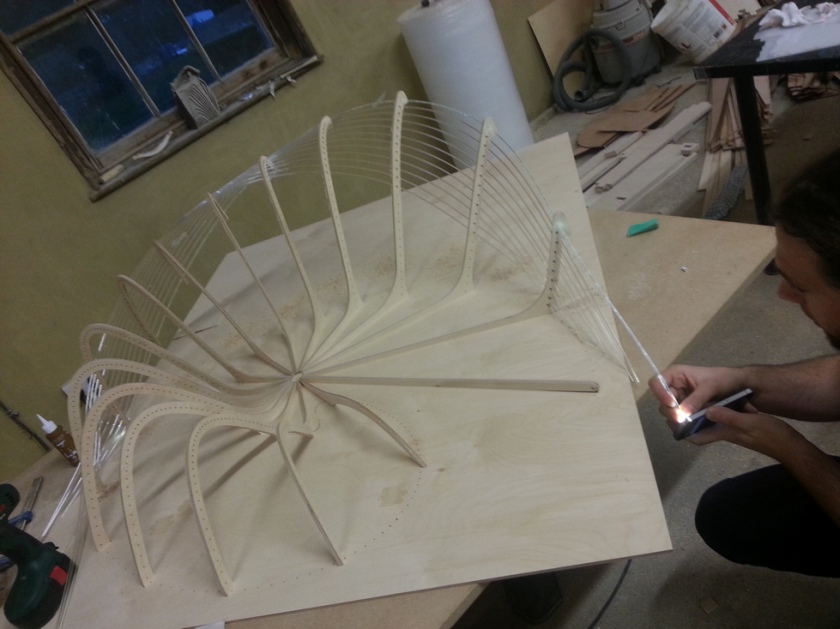 Above: Dan Dodds testing the fiber optic cables of his Sectionned Harmonograph

Above: Emma Whitehead cutting her convection cell models out of plywood

About a week ago, the brooklyn-based company Makerbot Industries, led by its ubiquitous CEO, Bre Pettis, released a 3D printer called the Replicator 2 (image below) at around $2,200 per unit.

While the Rep2 was being developped, I bought the parts of my RepRap Prusa Mendel (image below) for £500 from a company called RepRapPro which was created by the inventor of the RepRap 3D printers, Adrian Bowyer. RepRap is an open-source project, meaning that all the components of the machine are disclosed online. This project is also based on the idea of a “self-replicating” machine. In fact, I could print some of the parts of another machine (the white parts below are printed).

Makerbot was founded by some of RepRap core developers, Zach Smith, Bre Pettis and Adam Mayer with some investment from Adrian Bowyer. In August, Makerbot received around $10M in funding from Angel Investors such as Jeff Bezos, founder of Amazon.

All the previous printers and CNC machines that Makerbot developped were open-source but the Rep2 will not be. Have a look at the post from Bre Pettis regarding this topic, and more specificaly, read the comments after it as well as the post by Josef Prusa, core developper of RepRap. The following reply of Adrian Bowyer to Bre Pettis’ post sums up what he thinks about the replicator: “Ask yourself: which will be the more numerous 3D printer (or laser cutter): one that can self-replicate, or one that has to be made in a conventional factory?”

This debate is not only fascinating but illustrates a possible conflict between the notion of Open-Source technology and sustainable business.

This summer, I read the book Wikinomics,  by Don Tapscott and Anthony D. Williams (cover below). They praise the concept of Open-Source as a positive revolution for companies, giving the example of IBM which spends $100M a year on the development of LINUX, an open-source operating system. They say opening up patents and copyright law will allow for collaboration on an unprecented scale which will benefit everyone. They call the new consumers, the “prosumers” as they will no longer buy passively but will know the inner-workings of their products and will be able to improve/hack them. 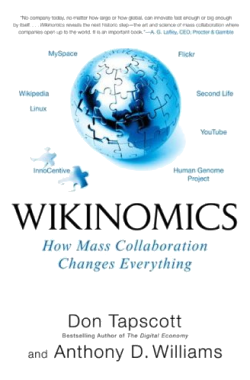 This is already happening with Arduino, Processing, FabLab, Hackspace…etc…communities in which people hack the Microsoft Kinect (video below) or Samsung/Android phones or any other devices with an open API (application programming interface) to create a new collaborative technology or pieces of art.

This whole debate resonnates within the architectural world in which Architects are often replaced by enthusiastic self-builders. With information being increasingly available online, knowledge will not necessarily be in our mind anymore but mostly on the web. What will remain in our minds is intelligence and decision on how and where to apply it.

Many questions arrise from it: How do we help self-builders or prosummers and do we want to help them? How do we offer our talent, our own experience to people that can technically do what we are suppose to do just by googling it? Can a business still be sustainable if it discloses all its innovations?