Harmonesthesia’s form embodies the serendipity of chancing upon a beautifully spiraled shell in the sand and realising that when placed next to the ear, that momentary experience can be conjured up in an instant, through the soft sound of waves, hundreds of miles away from its conception.

Harmonesthesia is a play on synesthesia, a crossing of the senses, that interchanges both visual and aural harmonies. The ritual production of art and music is defined by juxtaposition and harmony; Harmonesthesia will turn light into sound and sound into light.

A 5m shell will project from the ground with a low opening at its base, inviting participants to climb up into its interior. The internal structure will consist of tensioned plywood ribs that will also provide safe steps to climb up to the pinnacle, where interactions will be intimate. The exterior will be wrapped in 9mm plywood strips, curved around and nailed to the ribs. Their organic curvature will juxtapose the angular appearance of the ribs and steps partially concealed beneath. Wrapped between each strip of plywood will be LED strips. The interactive animation of these LEDs, along with loudspeakers placed inside the spine of the structure, will be controlled by a polar array of light sensors and microphones around the shell. 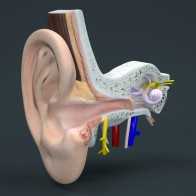 The spiral is a phenomena that occurs in much of the natural world from galaxy arms to snails, even the cochlea (from the Greek word for snail) or inner ear. It is a spiral-shaped cavity, in humans making 2.5 turns around its axis. Sound vibrations are converted into the sound we interpret by thousands of hairs within the cochlea; the spiral cavity allows each of these hairs to pick up slightly different frequencies which collectively can be interpreted as sound. Harmonesthesia’s form is inspired by this spiral, whose shape allows the conversion of sound into electrical impulse. Once thought to be extremely rare, synaesthesia is now believed to affect between 1 and 4% of the population. The Nobel Prize winning physicist Richard Feynman reported seeing equations in colour. The artist Wassily Kandinsky tried to recreate the visual equivalent of a symphony in each of his paintings. And Vladimir Nabokov wrote;

“One hears a sound but recollects a hue, invisible the hands that touch your heartstrings.  / Not music the reverberations within; they are of light. / Sounds that are coloured, and enigmatic sonnet addressed to you.”

Human cultures around the world have all to some extent cultivated their own sense of music; processional movement and dance are closely associated with these musical vernaculars, their combination a sort of synesthesia whereby one evokes the other by association. In this way Harmonesthesia will become the focus of a ritual procession and generator of harmonious music.

Please participate by downloading and exploring Harmonesthesia in digital form via this link. Unzip the folder and open the file and you will be able to control an avatar in the virtual playa; ‘WASD’ keys to move; ‘C’ to crouch; ‘M’ to hear the music; and ‘L’ to turn on lights. Enjoy!