A hyperbolic paraboloid is an infinite surface in three dimensions with both hyperbolic and parabolic cross-sections. A playful and intuitive way of visualising and parameterising this concept can be achieved via the implementation of origami folding techniques.

The images below show how to create and tile a basic hyperbolic parabola with origami. Once fully formed, the result is flexible and malleable along its two axes. 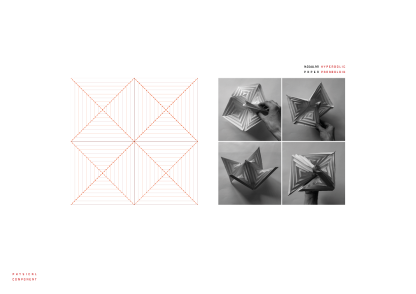 This playfulness only increases as additional sides are added to the initial parametric shape. This, in turn directly correlates with the increase of the number of axes along which the paraboloid is able to form. For example, a hexagonal initial sheet with six sides, will also have six axes. 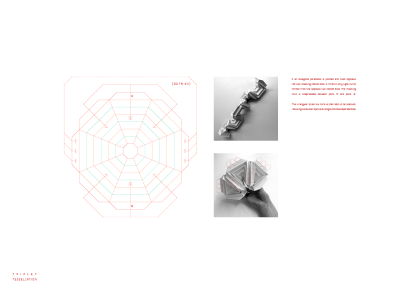 Octagonal and decagonal paraboloids are particularly enjoyable to create and play with.

When deconstructed, a decagonal paraboloid is comprised entirely of a series of ever diminishing, 72 degree trapezoids, that when tiled next to one another, come together to comprise individual components of one, larger trapezoid, or wedge. When tiled and secured along its long edge, a decagon is formed, and once folded, a hyperbolic paraboloid is possible.

It is through research and testing with digital fabrication how best to form and therefore scale this wedge component that a successful, parametric and human scale origami form might be accomplished.

The images below are further tests in a failed attempt at forming a larger, scalable hexagonal paraboloid. Previously, flexible material such as paper and polypropylene had been used to successfully form basic, octagonal and decagonal paraboloids. However, in this test, 4mm ply was used, and has proved to be most inflexible. Thusly, it is unable to bend universally along each of the six axes. Further testing is required.