“We can also discuss the mandala in terms of the soul. The soul is the totality of the mandala. Essence arises in the soul, but for a long time… the soul is not completely essentialized; only part of it is. The rest of the field of the mandala – the rest of the consciousness of the soul – is composed of all your mental, emotional and physical experiences. The thread is defined by the center of the soul, and we can know that center most specifically and in a delineated way by recognizing the essential presence and what quality is manifesting.”   – A.H.Almaas 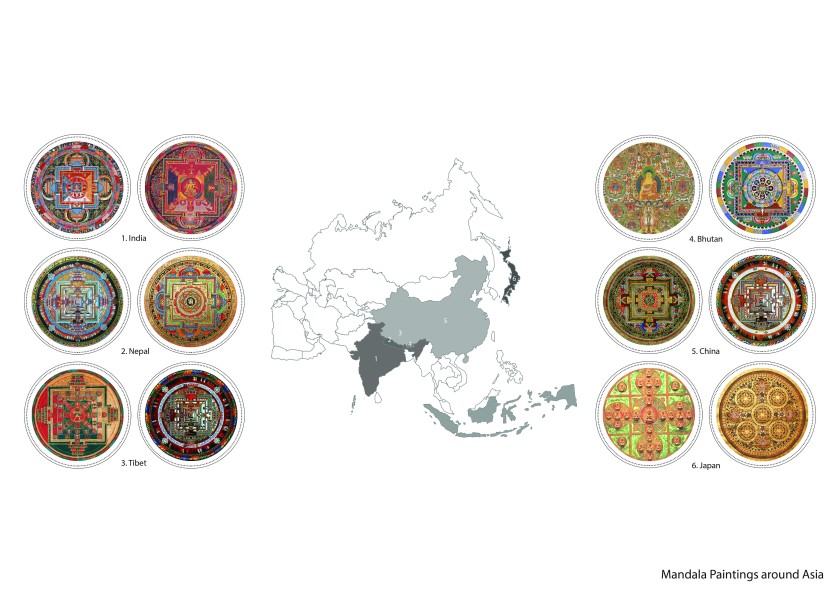 The word Mandala derives from:

Thus, the word Mandala translates as “the container of the essence”

However, as an image the mandala is a symbol representing both the mind and the body of the Buddha.

In esoteric Buddhism, the Mandala’s main principle is the presence of the Buddha in it. This can be represented either as a tree, a wheel or as a jewel, or in other symbolic manifestations.

The Mandala is consecrated to a deity. In its creation, a line materializes out of the dot, while other lines are drawn up to the point where they intersect, creating in that way triangular geometrical patterns. The central area of the Mandala is the residence of the deity. Each Mandala has its own resident deity, with whom the mandala is identified. The circle drawn around the deity’s residence stands for the dynamic consciousness of the initiated. It is the gathering point, in which all the outside forces are drawn.

The centre is visualised as the essence and the circumference as grasping.

In its complete form Mandala means:

The residence of the deity is located in the square structure concentrically within the surrounding circles. The outlying square symbolizes the physical world bound in four directions, which are represented by the four gates, which in turn symbolize the bringing together of the four boundless thoughts.

The square structure is divided into four isosceles triangles by lines that run from the center of the Mandala to the four corners. Each detail in all four quadrants or triangles faces the center, where the deity of the mandala resides. The square form defines the architecture of the Mandala described as a four-sided palace or temple.

Palace – Residence of the presiding deity

Temple – Contains the essence of the Buddha

The four quadrants of the Palace or Temple are divided into isosceles triangles of colour.

Each of the aforementioned colors is associated with one of the five transcendental Buddhas, further associated with the five delusions of human nature. These delusions obscure our true nature, however spiritual practice can transform them into the wisdom of these five respective Buddhas.

The series of concentric circles surrounding the central palace or temple follow an intense symbolic structure.

A person meditating on a mandala visualizes himself going into the mandala and making his way through the levels of images until he arrives at the center. Buddhists believe that the Mandala meditation helps concentrate spiritual power and bring freedom from suffering.

After thorough research on the Indian Mandala, I started designing mine taking into consideration the various symbolizations and components that constitute the traditional Mandala.

The Final Proposal – The Cubic Mandala

According to Buddhist religion, the mandala appears as a series of concentric circles that are a representation of the process of transformation that human beings are asked to undergo before entering the sacred area, located at the centre of the mandala. In other words, when meditating in front of a mandala, human beings move through the different layers, liberating themselves from the delusions that obscure our true nature, and consequently reach the centre of the mandala and attain enlightenment.

Based on that theory, the Cubic Mandala is a three dimensional, cubic representation of the traditional Indian Mandala and is designed in a way so that all the fundamental elements of the traditional mandala are being incorporated into the design. For instance, the central area, the palace or temple, the four quadrants along with the four gates, the ring of fire, the lotus and diamond ring, as well as the eight graveyards. The aforementioned are of great significance and vital to the process of transformation and the attainment of enlightenment and spiritualism.

This process is further emphasized by the introduction of 4 layers that form each side of the cubic mandala and represent the different stages that human beings have to overcome in order to reach the centre of the mandala. The cubic mandala is an actual representation of the difficulties one is asked to overcome in order to put an end to human suffering and acts as a means to discover divinity by the realization that it resides within one’s one self.

While observing a mandala, a kind of spiritual essence surrounds the one observing it, which as a result allows him a higher level of awareness and consciousness. Consequently, the creative mind of the individual is allowed to escape reality and run free. The mission of the “Cubic Mandala” is to encourage people to focus on it, absorb the beautiful designs and allow their minds to wander. People are tempted to let the “Cubic Mandala” absorb all their attention, by moving into the mandala and gazing into its patterns.

A feeling of lightness is what people are going to experience, while falling into the mandala. Intuitive thoughts might arise. People are encouraged to relax, embrace one another and let the feelings come to them. According to the tradition, the making process of the mandalas involved four monks – one at each quadrant – working simultaneously until the mandala was complete. Having said that, the original process of making highly encouraged interactivity. Therefore, the purpose of the “Cubic Mandala” is to bring people together and, through the ritual of mandala meditation, to raise their spiritualism, to promote self-expression and finally, to liberate them from the everyday life.