Tensegral Tipi uses mathematical symmetry to produce a structure that is in a state of equilibrium. The Tipi merges the concept of a conventional tipi with the structural stability of a tensegrity construction. A tensegrity construction is characterised by a stable three-dimensional structure consisting of members under tension that are contiguous and members under compression that are not. Tensegrity structures provide the ideal solution to the brief, not only are they mathematically symmetrical, they are self supporting and made of consistent sized components. In addition, they only achieve three-dimensionality once all the elements are equally loaded, meaning that, until the last node is connected, the elements remain in a flat-packed condition, a feature excellent for re-deployability. The compression elements will comprise of bamboo, a highly sustainable, easily sourced and cheap material, whilst the tension elements consist of steel cable, a strong and re-useable material capable of taking the tension necessary to achieve structural stability in the system.

The project began with a study in generating mathematical symmetry using imaginary functions in grasshopper. The use of imaginary numbers created patterns which would be challenging to create manually, all of which were symmetrical either in reflection or rotation. The equation µ(t)= 3√(x+it) created a pattern of straight lines which would combine to create curves in the style of a hyperbolic parabaloid. This outcome would initiate my interest in tensegrity as a way to create beautiful curving geometry through the use of solely straight elements.

Force testing using kangaroo engineering plugin for grasshopper, allowed visualisation of the forces acting on each member of the tensegrity system prior to construction. The first step is to identify the cross sectional area and youngs modulus of the tension and compression elements in the system. This information is applied to a kangaroo physics model, which is already in a state of compression and tension, to reveal the exact force running through each member. The data output is used to analyse if the model can hold its shape and that the materials used can withstand the forces applied to them. In this instance, the hemp rope would have the strength to tension the model, but would not be able to resist the additional force of human touch, resulting in catastrophic failure. A more substantial tensioning material would be required, steel tension cable. In addition, bamboo has a relatively weak shear force, meaning that the twist created from tensioning each end of bamboo would snap the member. To resolve this issue, end caps were developed to spin independently on each bamboo pole, transferring the shear force into the connection.

There would be two stages to the construction process, the tensegrity module and the connections between modules which form the inhabitable space. The tensgrity module was designed for ease of manufacture, all bamboo components are identical in length at 1220mm (material ships in 2440mm lengths). Pre-manufactured aluminium caps are fitted to the ends of each bamboo piece, then assembled into ‘ladders’ with the use of a jig, steel tension cable and cable crimps. Each tensegrity module consists of three identical ‘ladders’, which are twisted to connect to each other in a spiral arrangment. The module has six connection nodes, five of which can be pre-assembled prior to arrival on site. With the connection of the sixth node the module becomes a three-dimensional, stable shape. This technology results in the assembly of modules in-situe in under five minutes. The second stage of connecting the modules to form the inhabitable space, requires the insertion of pre-cut bamboo poles into the longer aluminium end caps, a process which can be completed in a further five minute period.

This project has many benefits, namely due to its simplicity, it can be built in a garage without the use of specialist tools, requiring only a saw, drill and pliers. Identical length components means manufacturing is intuitive, efficient and cheap, whilst the speed of deployment, and ease of flat pack storage, could have real benefits in the temporary shelter market.

The Amazing Surf is a complex fractal geometry which ascends toward the light, symbolizing our obsession with reaching for the stars. We use our increasingly digital world to help us extend our reach, but at what point do the shadows we cast reach out above us? 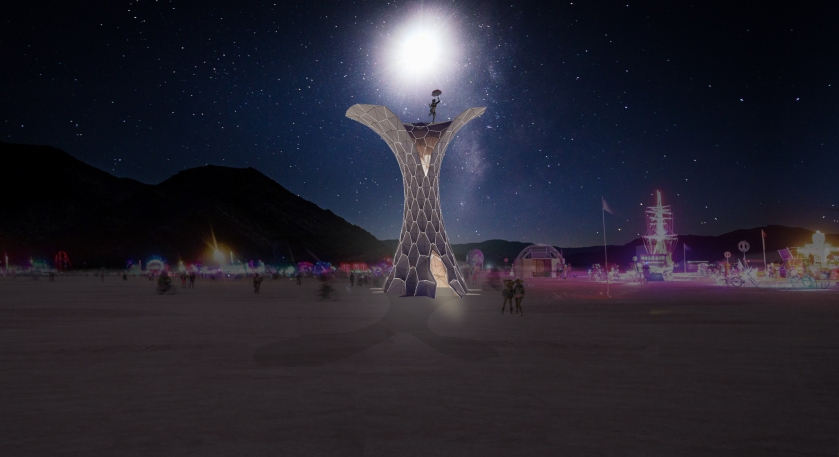 The shape is inspired by the Amazing surf fractal which is generated by a mathematical formula and visualized in Mandelbulb3D. A visually imposing 25ft tall Ply wood hyperbolic structure, with intricate evolving folded panels. Each folded panel is digitally unrolled into a 2D net and CNC milled, the resultant ply components will be glued to a layer of fabric and folded back to their original 3D shape. This construction technique removes the need for a supporting frame, keeping the complex geometry unobstructed from view. A few panels have been removed at the base to make way for an entry point. Neon strips attached to each panel will produce dramatic light patterns on the surface at night. The installation will orient toward the sunset, where the sun appears at it’s closest.

The piece is intended to be used as an impromptu climbing frame, a ladder to ascend burners above the desert and into the stars. Sunlight will bounce off the multi-faceted shapes, creating intricate patterns of light and shadow. Burners are invited to dance in the light shafts and seek shelter in the shadows. As the shape begins to flatten toward the top, the folded panels can be used as armchairs, where vision will be limited to that of the sky and light above; burners can sit and watch as the sky transforms from day to night.

As a race we strive to advance, developing new tools and machines to help us in this process. There will come a point in the not too distant future where the machines we have developed to help us will supersede us; we will become so reliant on technology, it will begin to control us. I see the Amazing Surf installation as a juxtaposition to this potential future; on the one hand we are using technology to create built environments that are intricate, beautiful and unique, on the other hand these environments are only attainable through the use of technology. If only we took a moment to look back into the shadows, we could avoid the fate that we are gradually bringing upon ourselves.