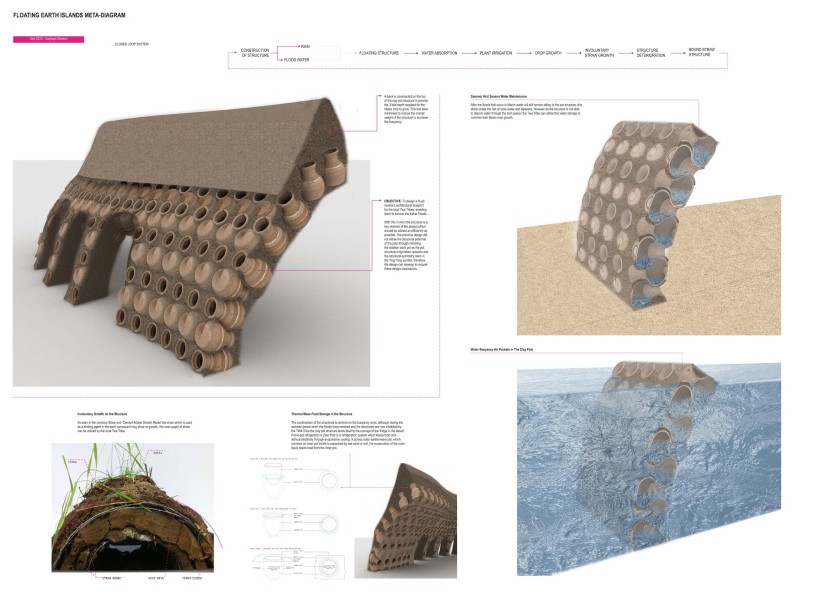 It’s time to break the monopoly of Monsanto!

Companies such as Monsanto are pushing the parameters of agricultural biotechnology to develop to ‘super’ crops which are able to survive in conditions that previously they would have perished within. This depicts a positive image of a global agricultural firm such as Monsanto, though this is predominately not the case and although the new developments in crop growth is perceived to be the future it is as highly critised and linked to names such as ‘Frankenstein foods’. Can a technology giant/charity like the Bill and Melinda Gates Foundation compete against a global agricultural giant like Monsanto and provide an equal competitor? The ‘Floating Earth Islands’ provide the opportunity to harvest a GM free alternative for Maize crop growth whilst also providing habitats for the fish in the Kafue River, which the Twa Tribe farm. As the floods recede and the land is returned to a harvestable condition the Twa Tribe can inhabit the clay pot structures that once were required to prevent the floods from destroying the tribes crops and livelihood.

PLUG-IN (Endemic Interstices) is a research group within the Architectural Association’s School of Architctures DRL. The group is formed of Alexandre Kuroda, Dağhan Çam, Karoly Markos, Ulak Ha, supported by their tutors Alisa Andrasek (Biothing) / Jose Sanchez  and technical advisor Riccardo Merello (Arup). The team have been working on this project for more than a year and on the 20th January 2012 held their final public jury at the AA. The thesis simulates the cracks with a particle-spring system using processing and partly soft image. Their documentation of their project explains the transition from a natural rule system, into a digital presentation of form, control and behaviour, developing their interpretation of the natural systems/rules of cracked mud into an architectural form.

The main driver of the thesis is a nonlinear fabrication technique that utilises cracks in clay soil as a formwork for casting intricate structures. By programming the material behaviour and exposing it to certain environmental condition we are able to control the emergence of a wide range of crack patterns which are responsible for different performative qualities such as structural stability, solar shading and airflow modulation consequent to their morphological features of different size, density and porosity. The deployment of the system on site employes earth works protocols and Top Down construction techniques in order to achieve a temporary scaffold.

The concept of is primarily based on the purifying and recycling of shower water, plus the evaporation of Grey Water. Fractured Interstitial Water System uses the water from a shower and through a series of thought out cracks filtrates, purifies and re-disperses the water around the shower systems. The programme of recycling the water at the Burning Man Festival informs the architecture by controlling the cracking formation to the preferable form for the programme, the Grey Water cracks vary in depth and scale to suit the change in the needs of the water and allows the grey water to be taken out into the playa for evaporation.
Water is a desirable and limited resource at the Burning Man festival; this programme will reduce the need to remove numerous liters of grey water from the Burning Man site after the festival and allows the concept of showering to be a daily activity rather than once or twice in two weeks.

The Liter of light project installs 1 pound light bulbs powered by water, bleach (to prevent mould) and sunlight. The project was designed by the students at the Massachusetts Institute of Technology. The bottle bulb harnesses the sun’s rays by refracting inside the bottle creating a 50-watt glow in a room. The project is being tested in the slums around Manilla, Philippines where open flames or homes tapping into the electricity grid caused more than 5000 fires last year. The ‘lights’ are estimated to save up to 40 percent on household expenses, and allow for the mother to do the household chores whist the children can study under better light.

The plan is to extend the project into India and Africa with a target of 1 million installations.

This image is from the flooding in Pakistan where millions of spiders climbed in to the trees to escape the flood waters. Because of the scale of the flooding and the fact that the water has taken so long to recede, many trees have become cocooned in spiders webs. People in this part of Sindh are reporting that there are now far fewer mosquitoes than they would have expected, given the amount of stagnant, standing water that is around. It is thought that the mosquitos are getting caught in the spiders webs and therefore reducing the risk of malaria.

The video clip is interesting geometrically and in deciphering the movement of the two spheres to see if they are rotating in the same direction or separately.