Le Ricolais was considered along with Fuller & Otto a leading expert on structural morphology in architecture. He was an engineer, architect, poet and painter, known for his theoretical research on trellis structures and tensegrity during the 1950’s. His work’s roots are in nature and science, in a seashell, a soap bubble or le Ricolais’ fantasy of ‘going inside a rope’ to find a new way to realize his central vision of zero weight, infinite span.

In 1935, as a practicing hydraulics engineer, he introduced the concept of corrugated stress skins to the building industry and was awarded the Medal of the French Society of Civil Engineers. Then in 1940 his work on three-dimensional network systems introduced many architects to the concept of ‘space frames.’ After years of research he was well established as the ‘father of space structures.’

Le Ricolais quote : ‘the art of structure is where to put the holes.’ 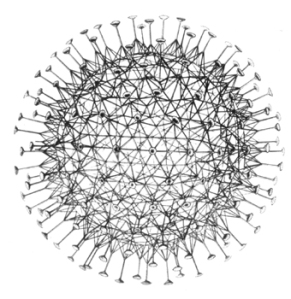 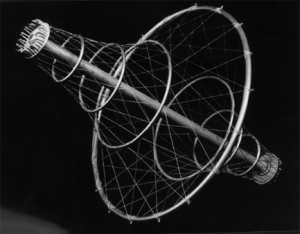