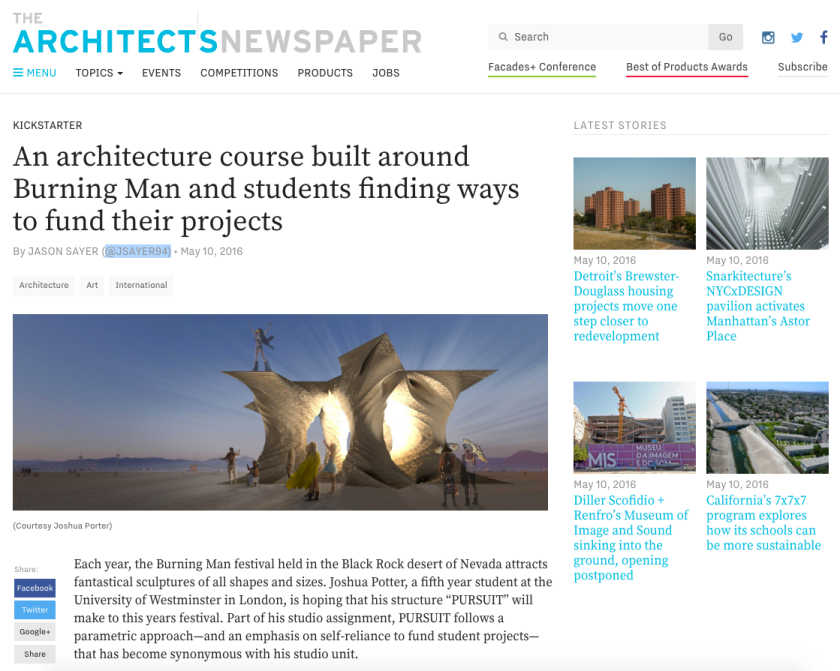 Following an interview with journalist Jason Sayer (@jsayer94) The Kickstarter Campaign for my project ‘Pursuit’ has been featured in an article for ‘The Architects Newspaper’.  The article  has been published online at ‘The Architects Newspaper’ website and can be viewed by clicking the following link: An architecture course built around Burning Man and students finding ways to fund their projects.. The Architect’s Newspaper serves up news and inside reports to a niche community of architects, designers, engineers, landscape architects, lighting designers, interior designers, academics, developers, contractors, and other parties interested in the built urban environment. The Architect’s Newspaper delivers quality news and cultural reporting through print, web, blog, newsletter, or twitter—all the news you want, in all the ways you want to get it.

There are only 5 days left to support the campaign and ensure that DS10 student work is represented at this years Burning Man Festival. We have a long way to go to reach our goal by May 16th at 9pm (BST), it is still acheivable – But we can’t do it without our loyal WWTL subscribers and fans, so please head over to the Pursuit Kickstarter Campaign page now and support the project in whatever capacity you can.

PURSUIT is an interactive art installation that celebrates humanity’s ongoing quest for Peace, Freedom and Joy – in Life, Love and Art. The design aims to create an interactive and unique sculptural playground for visitors of the 2016 Burning Man Festival, which takes place from August 28th to September 5th in Black Rock Desert, Nevada.

PURSUIT emerges from the playa in tiers of intertwined timber elements that ascend seamlessly in unison to form a series of congregation and celebratory spaces. The final design is the result of a year-long study into the sensuous geometry generated from a mathematical theory known as Pursuit Curvature. This theory was explored as I wanted to utilise something that could fully embody the notion of people coming together from different places and striving towards a common goal. With Pursuit Curvature, each point starts at a unique position of a polygon, and moves incrementally towards the nearest adjacent point until they all converge in the centre. The path travelled is directly influenced by the points around it, so the final curves represent the effects all of the points have on one another as a group.

Burners can rest inside the ornate central space of Pursuit, which frames the ongoings of the playa and provides burners with a place of respite from the open sun. The six inhabitable pillars connect the playa directly to the platforms that lie atop Pursuit. Here, a glorious vantage point in which to congregate and take in the festival is gifted to Burners. During the day the interiors of the pillars are concealed from the elements, and their curved form helps to guides burners ascent to the open air. Here they can bathe in the wondrous light of either sunrise or sunset, a truly magical playa experience indeed.

At night time each pillar’s interior is powerfully lit to envelop the burners in light, so they can experience a sense of weightlessness and freedom. The soft glow emanating from each of the pillars’ cores invites burners to commune atop Pursuit to celebrate the radiant beauty of the night sky.

“As I look back on my life, I realise that every time I thought I was being rejected from something good, I was actually being re-directed to something better.” – Steve Maroboli.

Pursuit is a gift to the Burning Man community. Every year, we apply for funding from the Black Rock City LLC (Burning Man) to help fund our projects. Unfortunately this year, nobody received funding towards their project. Despite initial disappointment, I realised that this helped elevate the project’s intent and concept to a new level than originally planned. By crowdfunding the entirety of the project, we can manifest the collective Pursuit of people from all over the world to see this project built. This is not only tremendously exciting, but also a very humbling prospect, in that we have a passion to give this gift to the playa, but we need your help to give that gift. It is through this collective pursuit that we can embody the spirit of the festival and the project in a built architectural form.

To show our gratitude for any of your generous pledges, I have created some truly beautiful and unique rewards for all levels of contribution – Each inspired by the projects form and concept, that are all exclusive to this campaign. Please do go and have a look for yourself at them and support the campaign. If you can’t spare a donation at this time, then please share the campaign to as many people as you can – so that together, we can make the project a reality.

As part of my research to inform my final thesis project on the London Housing Crisis, I have created a short multiple choice survey that would benefit greatly from the input of members of the WeWantToLearn community who have lived in London at any point over the past six years. The survey only takes a few minutes to complete and will directly influence the design progression of my project in the coming weeks. Please spare a few moments to participate, and/or share with friends and relatives who may be able to contribute also.

You can find the survey at the following link: Here

All survey responses are anonymous.

Thank you in advance.

As part of our research for Brief 03; ‘Future Cities’, DS10 travelled to the wonderful city of Copenhagen, Denmark. The video above was made to provide a glimpse into the incredible time the unit had whilst visiting the city and all of the amazing Architecture it had to offer during our visit. Below is a schedule and some pictures that provide further details of our trip which took place from the 29th January  until the 2nd February 2015. We would like to thank all involved for their generosity and time.