“Vocal music is considered to be the highest, for it is natural; the effect produced by an instrument which is merely a machine cannot be compared with that of the human voice. However perfect strings maybe, they cannot make the same impression on the listener as the voice which comes directly from the soul-breath and has been brought to the surface through the medium of the mind and the vocal organs of the body”.

– Harzat Inayat Khan, The Mysticism of Music, Sound and Word –

The combination of architecture, derived from fractal geometry, and the power of sound led to the creation of Anahad. This installation is an interactive musical display, which will be acting as musical instrument giving voice to the burners and the surrounding environment. 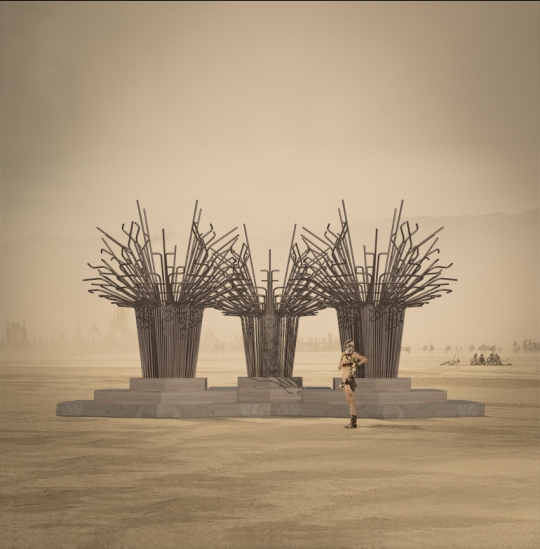 This art installation, which challenges the perception of nature, is called Anahad. I am planning to build 3 free-standing “trees”, each measuring 1.5m in diameter at the base and 3m at the top. The trees are 5m tall and they are composed of 105 copper pipes or mild metal tubes each measuring 6m long and ranging between 30 and 45mm in diameter. A central column connected to a solid base is the main structural element supporting 2 concentric layers of pipes.

The most external pipes are bent and perforated and filled with LED strips that will shine through the openings. Every pipe will generate a different sound based on the perforation pattern and the bends. The inner pipes, which are only bent and connected to a propane tank, will spit fire from the top. 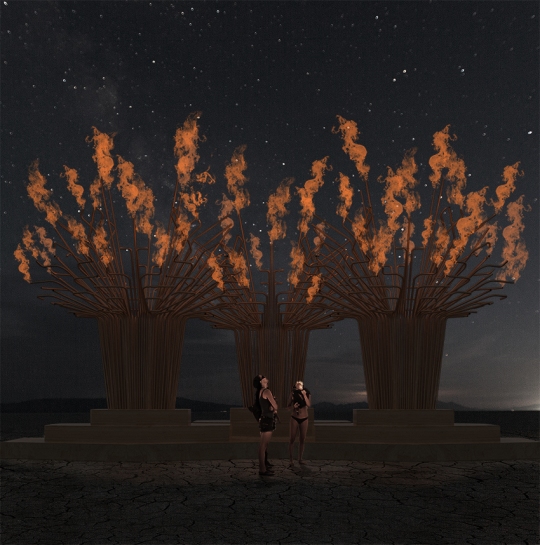 Anahad establishes a connection among the user, the art, and the environment.
Can you recall how the wind blowing sounds? Is it always the same? This design will act as a musical instrument, which will be playable both by burners and the Playa itself.
During nighttime, the user will be transported both visually and sensorially into a digital forest through a LED light show mimicking sun rays penetrating the forest treetops. Then flames will be shooting out from the top to mark every hour.
The aim of this installation is to create an uninterrupted musical performance, combining the sounds produced by burners hitting the pipes or by the wind blowing through the pipes. The central space between the three trees and the niches at their base will provide a space to meditate and be mindful of the soundless sound of the Playa. This installation in its simplicity will connect people and natural environment through the use of musical harmony.

Anahad is solely an instrument through which the breath of the Playa will blow, singing for the burners. Vice versa, burners will be able to express themselves striking the metal pipes playing melodies for the community and the surroundings.
This installation aims to connect the people to the Playa. The three “trees” are a digital fabricated representation of a natural forest. In a world where disconnecting from reality becomes a luxury, where innovation takes over simplicity, and nature gets left aside in our busy lives, music is what makes us human. Anahad challenges the way we experience reality, by combining the digital and virtual world with the natural environment. The aim is to provide the participants with an ideal environment for them to meditate in and be mindful of their whole experience.

The Ritual of Light

SOL is an architecture designed by Burning Man for Burning Man as a celebration of its surrounding landscape.The design creates an enclosed space, which is flooded with light daily at 12pm for a limited time. This ritual occurs only when both sun and architecture line up, becoming one entity.

SOL is 9m long, 3m wide and 5m tall. The entire structure is made out of 18mm birch plywood, cut with CNC and assembled on the Playa.

SOL is directly connected with its surrounding landscape, mimicking the silhouette of the harsh mountains. A series of 9 chimneys, which rise from the ground create several sloped surfaces where users can lay down to relax and embrace the natural surrounding. During daytime SOL will be a climbable structure, which can also provide shelter from the challenging conditions of the desert.

SOL was designed to act, appear and generate different experiences based on the user’s position. Frontally viewed it acts as a sun clock aligning with the sun at 12pm. 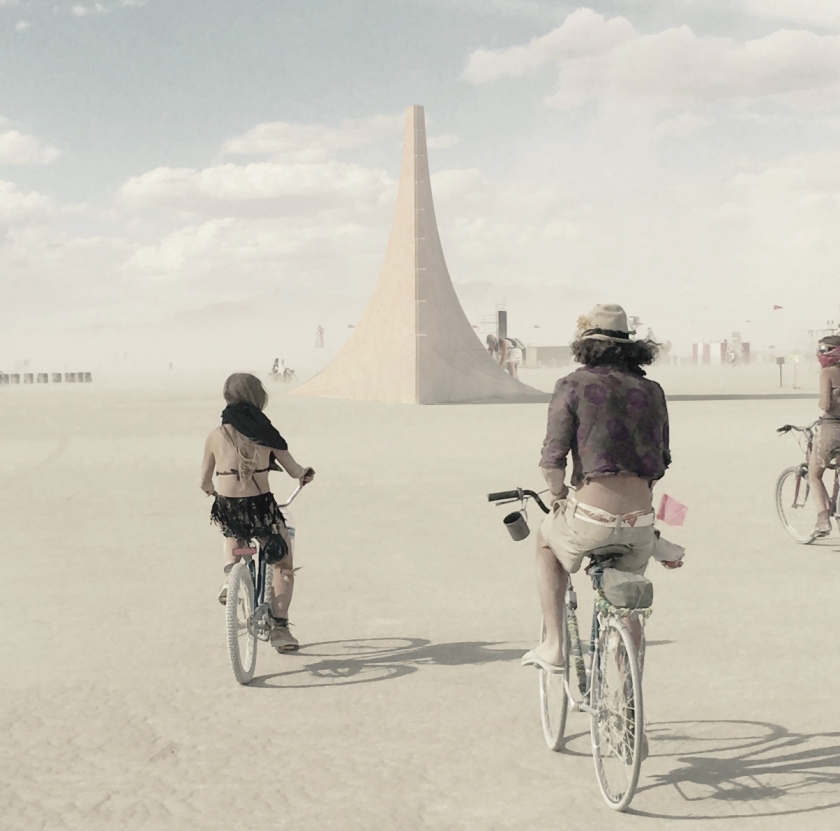 The overall shape resembles a series of monolithic rocks emerging from the playa, which are inspired by the landscape. During night time, SOL is dynamically lit by LED strips both internally and externally, producing a colorful light show, which celebrates the darkness of the night through artificial light.

Over the years, Black Rock City has seen a multitude of projects which have been created to animate the Playa.

SOL aims to be a playful, interactive and informative design, which enhances the relationship between humans and celestial bodies, in particular with the sun. Human history has been driven by the cult of the sun, and divinities and architecture have been dedicated to it. With the help of parametric design and environmental analysis, SOL is a direct representation of a particular moment on the playa: 12pm of everyday.

Internally, the light that penetrates and cast itself on the floor for only 30 minutes, wants to make the user aware of the sun’s movement in a more evident way. This phenomenon is a daily ritual, which brings people together in order to experience a connection with our universe that we sometimes take for granted since we cannot directly perceive it.

The wooden structure will be lit on fire on the last day of the festival since it was designed to exist only at Burning Man for the length of the festival.

My inspirations has a direct link to archeoastrology, a science that looks at the relationship between celestial bodies and architecture, i.e. Stonehenge, Chiceniza and the Parthenon in Rome. The common element between these projects is the attention, precision and relation with the sky and the movement of the sun. All of these projects and many more, create a different dimension where the architecture only becomes a tool to admire and contemplate what surrounds us.

In conclusion, SOL aims to be an example of how architecture can be shaped by the use of datas and parametric design, in order to deliver a project which is directly derived from its surrounding environment.