Through extensive research into the construction of grid shells, as well as differential geometry, I present a design solution for a complex grid structure inspired by the highly symmetrical and optimised physical properties of a triply periodic minimal surface. The proposal implements the asymptotic design method of Eike Schling and his team at Technical University of Munich.

‘Minimal Matters’ utilises the several geometric benefits of an asymptotic curve network to optimise cost and fabrication. From differential geometry, it is determined asymptotic curves are not curved in the surface normal direction. As opposed to traditional gridshells, this means they can be formed from straight, planar strips perpendicular to the surface. In combination with 90° intersections that appear on all minimal surfaces (soap films) this method offers a simple and affordable construction method. Asymptotic curves have a vanishing normal curvature, and thus only exist on anticlastic surface-regions.

Asymptotic curves can be plotted on any anticlastic surface using differential geometry.

(a) Planes of principle curvature are where the curvature takes its maximum and minimum values. They are always perpendicular, and intersect the tangent plane.

(c) The direction and magnitude for these directions vary between points on a surface.

(d) Starting from point, lines can be drawn to connect points along the paths of principal and asymptotic directions on the respective surface.

The next step is to create the asymptotic curve network for the Gyroid minimal surface; chosen from my research into Triply Periodic Minimal Surfaces.

As the designer, I can merely pick a starting point on an anticlastic surface from which two asymptotic paths will originate. It is crucial to understand the behaviour of asymptotic curves and its dependency on the Gaussian curvature of the surface.

Through rotational symmetry, it is resolved to only require six unique strips for the complete grid structure (Seven including the repeated perimeter piece).

The node to node distance, measured along the asymptotic curves, is the only variable information needed to draw the flat and straight strips. They are then cut flat and bent and twisted into an asymptotic support structure.

Eight fundamental units complete the cubit unit cell of a Gyroid surface. Due to the scale of the proposal, I have introduced two layers of lamellas. This is to ensure each layer is sufficiently slender to be easily bent and twisted into its target geometry, whilst providing enough stiffness to resist buckling under compression loads.

‘Minimal Matters’ aims to create an explorative, meditative and interactive experience for visitors. It is a strained grid shell utilising the geometrical benefits of an asymptotic curve network; digitally designed via algorithmic rules to minimise material, cost, and construction time.

Inspired by the highly symmetrical and optimised physical properties of a triply periodic minimal surface, ‘Minimal Matters’ aims to create an explorative, meditative and interactive experience for visitors. It is a strained grid shell utilising the geometrical benefits of an asymptotic curve network; digitally designed via algorithmic rules to minimise material, cost, and construction time.

The proposal takes the form of a crystalline structure found in nature, interpreted through parametric design into a timber grid art piece. In the sense of repeating themselves in three dimensions, a gyroid is an infinitely connected triply periodic minimal surface. A minimal surface is a single surface articulation which minimises that amount of surface needed to occupy space. The proposal represents restoring a balance in energy, taking only that of the earth’s resources required to fulfil the form. Our inability to distinguish our needs from our greeds leads to excessive desires for life’s commodities. The efficiency of the design complements the beauty of rotational symmetry of a single node.

The lattice structure will create foot and hand holds to help climbers onto the series of sloping platforms; allowing users to survey the desert camp from different perspectives.

More than just a climbable structure, Minimal Matters is to be a resting place for festival-goers and a shelter from the strong sun of the site. The layers of grids cast shadows of varied patterns throughout the day. At night, LED lighting along the lamellas will celebrate it’s form and illuminate the playa.


Inspired by nature, the proposal brings a parametrically designed structure into the realm of physical interaction. The piece is a culmination of thorough research and physical exploration of timber’s potential. The combination of conceptual bravery matched with architectural reality seeks an architecture of playfulness and beauty which will respond to the inclusive environment of Burning Man. It will celebrate a new design method for timber grid construction, and symbolise the harmony between nature and computational design. 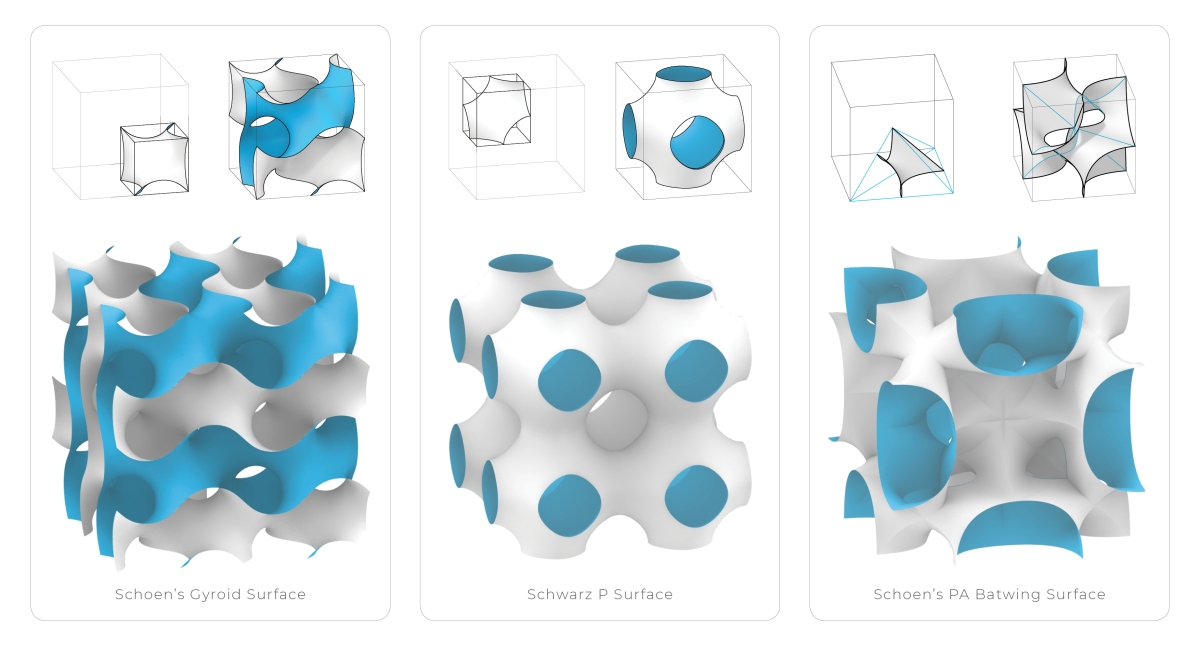 A minimal surface is the surface of minimal area between any given boundaries. In nature such shapes result from an equilibrium of homogeneous tension, e.g. in a soap film.

Minimal surfaces have a constant mean curvature of zero, i.e. the sum of the principal curvatures at each point is zero. Particularly fascinating are minimal surfaces that have a crystalline structure, in the sense of repeating themselves in three dimensions, in other words being triply periodic.

Many triply periodic minimal surfaces are known. The first examples of TPMS were the surfaces described by Schwarz in 1865, followed by a surface described by his student Neovius in 1883. In 1970 Alan Schoen, a then NASA scientist, described 12 more TPMS, and in 1989 H. Karcher proved their existence.

My research into grid structures with the goal of simplifying fabrication through repetitive elements prompted an exploration of TPMS. The highly symmetrical and optimised physical properties of a TPMS, in particular the Gyroid surface, inspired my studio proposal, Minimal Matters.

The gyroid is an infinitely connected periodic minimal surface discovered by Schoen in 1970. It has three-fold rotational symmetry but no embedded straight lines or mirror symmetries.

For every patch formed by the six edges, only three of them is connected with the surrounding patches.

Note that the cube faces are not symmetry planes. There is a C3 symmetry axis along the cube diagonal from the upper right corner when repeating the cubic unit cell.

Curiously, like some other triply periodic minimal surfaces, the gyroid surface can be trigonometrically approximated by a short equation:

Using Grasshopper and the ‘Iso Surface’ component of Millipede, many TPMS can be generated by finding the result of it’s implicit equation.

Standard F(x,y,z) functions of minimal surfaces are defined to determine the shapes within a bounding box. The resulting points form a mesh that describes the geometry.

The above diagrams show Triply Periodic Minimal surfaces generated from their implicit mathematical equations. The functions are plotted with a domain of negative and positive Pi. By adjusting the domain to 0.5, the surface patch can be generated.


Schoen’s batwing surface has the quadrilateral tetrahedron (1/48 of a cube) as it’s kaleidoscopic cell, with a C2 symmetry axis. As shown in the evolution diagram below, the appearance of two fundamental regions is the source of the name ‘batwing’. Twelve of the fundamental regions form the cubic unit cell; however this is still only 1/8 of the complete minimal surface lattice cell.