The ‘Time-Bank’ thesis project focuses on the concept of alternative social and economic models in relation to lightweight structures and individuals’ participation.

The current economic and social crisis that engulfs Greece, which simultaneously affects the local society and the global village, was the main area of investigation. The aim was to surpass the images of violent protesting that are being regularly reproduced by the media and focus on how people react to the crisis in their everyday life.

It was during the summer of 2011 that the ‘Resentful Movement’ was formed, where people flooded the main squares of Greek cities and tried to express their disagreement to the political handling of the crisis, aiming for direct democracy.

Through the ‘Resentful Movement’ the Greek Time-Bank was formed. The Time-Bank is a community where people exchange services with the transactional unit being time. Every person and every service, whether manual or mental, are equally valued according to the time required for their completion.

Both the character of the Time-Bank organization and the context of the crisis inform the architectural proposal which aims at a low-cost and self-assembling model. Scavenged pallets and excavated earth from the adjacent archaeological site of Plato’s Academy are used as building materials along with pre-fabricated wooden beams and planks.

The Agora space of ancient Greek cities has been analyzed in Space Syntax terms in order to inform the new proposal. The Agora space was normally the largest open convex space of the polis and is considered as the locus of the foundation of democracy. The Agora hosted the combined political, religious and commercial functions of the city-state.

The building program includes an administration space, a café/restaurant, the service exchange units and an open-air theater. The design proposes a central canopy ‘stoa’ colonnade, underneath which the modular units will emerge, and a main courtyard. The construction on site is not a ‘one-off’ scheme, but will follow a gradual addition as long as materials and members will become available. The modular huts and the canopy have been developed according to standard sizes of wood and members are asked to set up the structures themselves, following a user-friendly manual.

The design of the main canopy includes some tent and some pergola covered areas, providing shading to the spaces underneat. The design of the theater is constructed by pallets and earth, while the facades of the complex aim at breaking down the linearity of the scheme and bringing in some of the protesting character to the architectural proposal.

A short animation showing the gradual addition of units on site.

Greece is at a turning point. For decades the Goliath forces in politics and government have failed to tackle the major problems facing Greece. As a result, the people of Greece have understandably lost trust in those institutions.

The top will not solve this problem: Parties have to trust the people before the people will ever trust the parties. A successful political party will use technology to empower their supporters to arm an Army of Davids to take back Greek politics from the failed Goliath institutions. 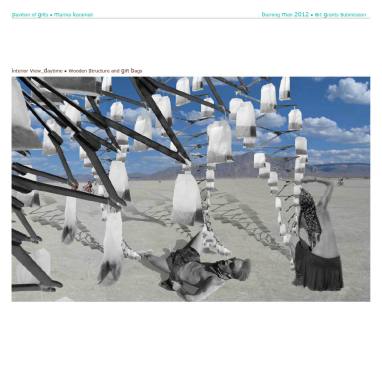 One of the most fascinating aspects of Burning Man is the idea of gifting, the event of exchanging goods that takes place between participants with no commercial aims. This notion plays a fundamental role in the relationships that occur between people but also between people and their physical, built environment. The event of gifting is an action between one person which creates a reaction to the second one. This interaction can equally inform the spatial conditions and appearance of an architectural structure when such an event takes place within it. The aim of this project is to create a system which equally participates in this exchange procedure and which interacts with visitors in giving and receiving gifts. The ‘Pavilion of Gifts’ aims to manifest the different conditions of the event of gifting as it will actively participate with visitors. New spatial and social relationships will occur, where most of them are unpredictable but very interesting and original.

The design of the pavilion derives from the geometry of spirals. Spirals, are found in nature in plants and animals and their form is defined by mathematical expressions. The ‘Pavilion of Gifts’ employes a series of spirals, which when set together will form an aesthetically attractive and beautiful pavilion. The structure of each spiral is formed by a series of wooden triangular in shape pieces, all of the same shape but different in size. Because of the bending and flexible capacities of the material, the spiral will be formed with no extra components or joints. Each wooden piece is designed to fit with the next one with no extra component. In between of this wooden spiral, bags will be attached with a hidden circuit of LEDs which will make them to illuminate when left empty.

People passing by will fill in the illuminated bags with whatever they like and they will be free to open another bag and take the gift which is set from someone else within it. The illumination of the pavilion will be defined by the gift exchange procedure and will vary constantly. In this first approach the visitor would create an interactive relationship with the structure. 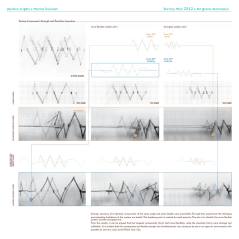 Folding 2D patterns to 3D objects only by lighting up the object is a very interesting technique been developed by the North Carolina State University. The process is very simple. A pre-stressed plastic sheet is run through a conventional inkjet printer which prints on it bold black lines. The bold black lines absorb more light when placed under the heat lamp, thus causing folding.

These air-supported structures were filling up with air according to visitors’ presence around them.
For more images visit Unit14 blog: http://bartlettunit14.tumblr.com/tagged/Performance

Creating the casts from Christos Antonopoulos on Vimeo.

This project from MAADM explores the way forms and patterns can be created on a sand surface from an agend. The patterns were then casted in order to extract more information.

For more information you can have a look here: http://christosantonopoulos.tumblr.com/tagged/ThesisDevelopment

An interview with Philip Beesley on his project for the 12th Biennale Exhibition. The ‘Hylozoic Ground’ is an immersive, interactive architectural installation fitted with arrays of sensors and kinetic devices. Lightweight interlinking systems are interwoven with chemistry and respond to their environment.