Reflection presents this years burners with an intimate setting in which to share their inner most confessions, secrets and tales – With the option to do so both openly with other burners face to face, or retain the mystery of their identity by sharing with a complete stranger through the pavilions semi private screen. Reflection embodies the theme ‘Carnival of Mirrors’ in a variety of manners:- the geometry of the pavilion not only mirrors itself in its own form, but also incorporates a reflective surface within its interior spaces. The reflective physicality of the pavilion beautifully juxtaposes its function, by giving its burners a physical platform with which to cogitate their innermost thoughts and feelings, and share these with others. The pavilion is created as a result of rigorous testing of origami in order to create a single Spiralhedron which is then mirrored through along all axis. Based upon a geometric origami principle which outlines the rules for the triangular subdivision of a 2-dimensional shape and assigns mountain and valleys creases to each subsequent subdivision the Spiralhedron has been optimised through both digital and physical testing. Reflection takes an abstract approach to this years theme, the pavilion’s form manifests itself as a result of mirroring this singular Spiralhedron in the X,Y and Z axis, which in turn creates its enclosing plywood form. In order to create the semi-private confessional screen, the panels incorporate a pattern, providing both the function of privacy, but also narrating the origins of the pavilions final form.

The principles of Burning Man are carefully considered, by providing an interactive base for participation that is never fully accomplished without the burners involvement. By sharing their stories, burners create a unique experience manifested through the ideals of trust and sharing, which facilitates a special bond between the burners. Upon its burning at the end of the festival, ‘Reflection’ becomes a resting place for the confessions, secrets and stories of its burners, allowing new bonds to be formed. 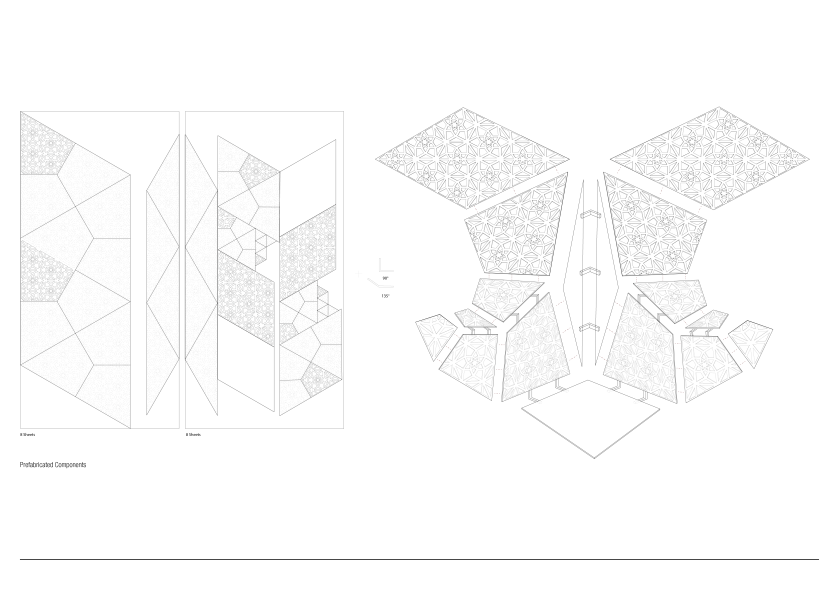 Due to form being created through the act of mirroring the entire pavilion will be made of 9 unique laser cut panels which will be bolted together with both metal hinges and 90 degrees and wooden brackets at 135 degrees.

Constrained by the size of a plywood sheet each individual Spiralhedron is made of two sheets of plywood (requiring 16 in total). Made of eight spiralhedrons ‘Reflection’ has a footprint of 3.5metres*3.5metres with a maximum height of 3.5m creating a footprint equal to that of the height of the pavilion.

One thought on “Reflection”