First, second and third dimensions, and why fractals don’t belong to any of them, as well as what happens when you get into higher dimensions. 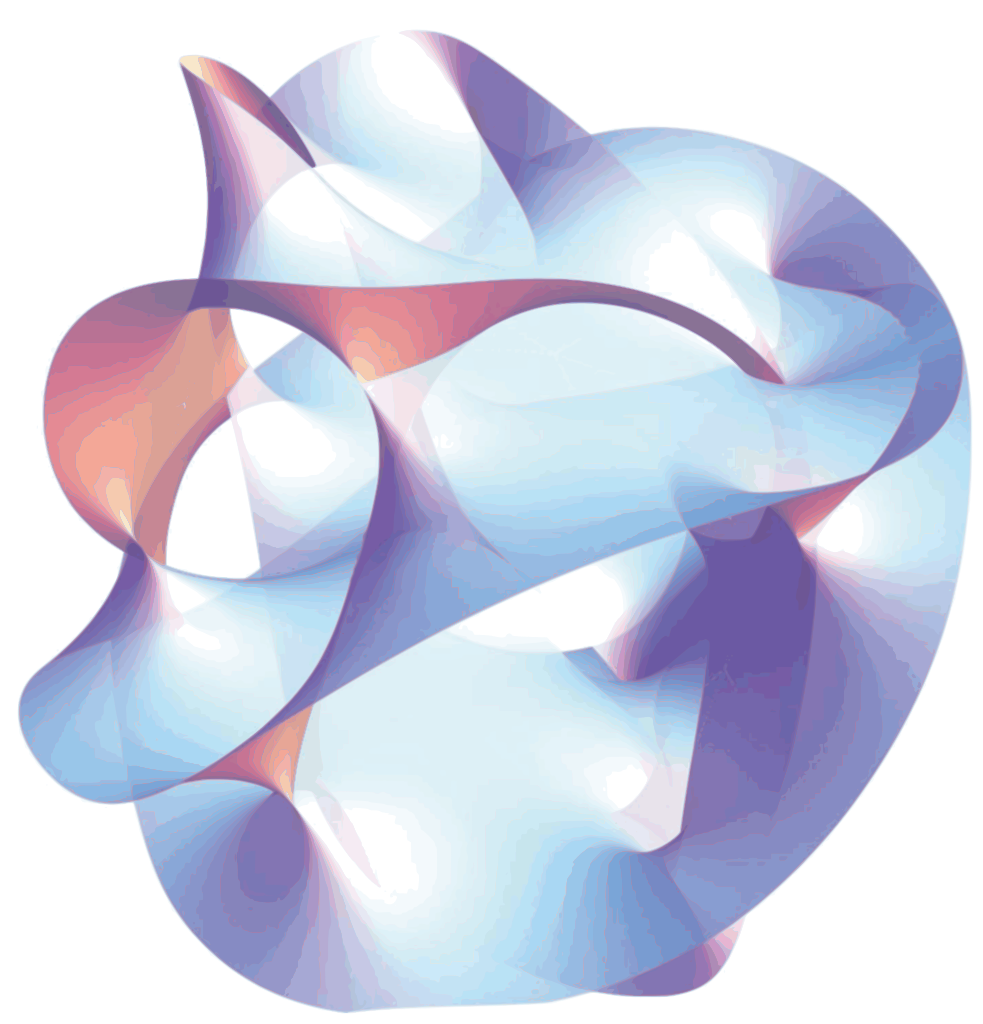 In this post, I’m going to try my best to explain the first, second, and third dimensions, and why fractals don’t belong to any of them, as well as what happens when you get into higher dimensions. But before getting into the nitty-gritty of the subject, I think it’s worth prefacing this post with a short note on the nature of mathematics itself:
Alain Badiou said that mathematics is a rigorous aesthetic; it tells us nothing of real being, but forges a fiction of intelligible consistency. That being said, I think it’s interesting to think about whether or not mathematics were invented or discovered – whether or not numbers exist outside of the human mind.
While I don’t have an answer to this question (and there are at least three different schools of thought on the subject), I do think it’s important to keep in mind that we only use math as a tool to measure and represent ‘real world’ things. In other words, our knowledge of mathematics has its limitations as far as understanding the space-time continuum goes.

In physics and mathematics, dimensions are used to define the Cartesian plains. The measure of a mathematical space is based on the number of variables require to define it. The dimension of an object is defined by how many coordinates are required to specify a point on it.

It’s important to note that there is no ‘first’ or ‘second’ dimension. It’s a bit like pouring three cups of water into a vase and asking someone which cup is the first one. The question doesn’t even make sense.
We usually arbitrarily pick a dimension and calling it the ‘first’ one.

Something of zero dimensions give us a point. While a point can inhabit (and be defined in) higher dimensions, the point itself has a dimension of zero; you cannot move anywhere on a point.

A line or a curve gives us a one-dimensional object, and is typically bound by two zero-dimensional things.
Only one coordinate is required to define a point on the curve.
Similarly to the point, a curve can inhabit higher dimension (i.e. you can plot a curve in three dimensions), but as an object, it only possesses one dimension.
Another way to think about it is: if you were to walk along this curve, you could only go forwards or backward – you’d only have access to one dimension, even though you’d be technically moving through three dimensions. 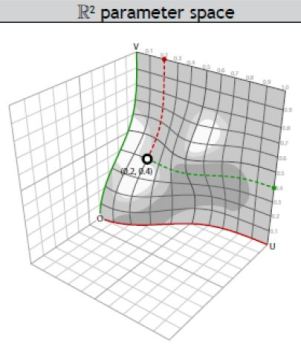 A plain can be defined by x&y, y&z or x&z; more complex surfaces are commonly defined by u&v values. These variable are arbitrary, what is important is that there are two of them.

Shapes in three dimensions are most commonly represented in relation to an x, y and z axis. If a person were to swim in a body of water, their position could be defined by no less than three coordinates – their latitude, longitude and depth. Traveling through this body of water grants access to three dimensions.

Fractals can be generally classified as shapes with a non-integer dimension (a dimension that is not a whole number). They may or may not be self-similar, but are typically measured by their properties at different scales.

2.1 – Between the First & Second Dimensions

A line or a curve gives us a one-dimensional object that allows us to move forwards and backwards, where only one coordinate is required to define a point on them.

Surfaces give us two-dimensional shapes, where two coordinate are required to define a point on them.

Each fractal has a unique dimensional measure based on how much space they fill.

2.2 – Between the Second & Third Dimensions

Surfaces give us two-dimensional shapes, where two coordinate are required to define a point on them.

A volume gives us a three-dimensional shape where a point could be defined by no less than three coordinates.

While these models live in three dimensions, they do not quite have access to all of them. You cannot define a point on them with two coordinates: they are more than a surface and less than a volume.

The Menger Sponge for example has (mathematically) a volume of zero, but an infinite surface area.

In theory, higher (non-integer) dimensional fractals are possible.
As far as I’m concerned however, they’re not particularly good for anything in a three-dimensional world. You are more than welcome to prove me wrong though.

That being said, it’s plausible that we experience much higher dimensions that are just too hard to perceive. For example, an ant walking along the surface of a sphere will only ever perceive two dimensions, but is moving through three dimensions, and is subject to the fourth (temporal) dimension.

If we consider time an additional variable, then despite the fact that we live in a three dimensional world, we are always subject to (even if we cannot visualize) a fourth dimension.
Neil deGrasse Tyson puts it quite plainly by saying:
“[…] you have never met someone at a place, unless it was at a time; you have never met someone at a time, unless it was at a place […]”
Suppose we call our first three dimensions x, y & z, and our fourth t: latitude, longitude, altitude and time, respectively. In this instance, time is linear, and time & space are one. As if the universe is a kind of film, where going forwards and backwards in time will always yield the exact same outcome; no matter how many times you return to a point in point time, you will always find yourself (and everything else) in the exact same place.
However time is only linear for us as three-dimensional beings. For a four-dimensional being, time is something that can be moved through as freely as swimming or walking.

We know that we can construct a cube by folding a series of two-dimensional surfaces together, but this is only possible with the third dimension, which we have access to.

If we visualise, in two dimensions, a cube rotating (as seen above), it looks like each surface is distorting, growing and shrinking, and is passing through the other. However we are familiar enough with the cube as a shape to know that this is simply a trick of perspective – that objects only look smaller when they are farther away.

In the same way that a cube is made of six squares, a four-dimensional cube (hypercube or tesseract), is made of eight cubes.

It looks like each cube is distorting, growing and shrinking, and passing through the other. This is because we can only represent eight cubes folding together in the fourth dimension with three-dimensional perspective animation.

Perspective makes it look like the cubes are growing and shrinking, when they are simply getting closer and further in four-dimensional space. If somehow we could access this higher dimension, we would see these cubes fold together unharmed the same way forming a cube leaves each square unharmed.

Below is a three-dimensional perspective view of hypercube rotating in four dimensions, where (in four-dimensional space) all eight cubes are always the same, but are being subjected to perspective.

3.3 – The Fifth and Sixth Dimensions

On the temporal side of things, adding the ability to move ‘left & right’ and ‘up & down’ in time gives us the fifth and sixth dimensions.

This is a space where one can move through time based on probability and permutations of what could have been, is, was, or will be on alternate timelines. For any one point in this space, there are six coordinates that describe its position.

In spacial dimensions, it is theoretically possible to fold four-dimensional objects with a fifth dimension. However, it becomes increasingly difficult for us to visualise what is happening to the shapes that we’re folding.

There’s a terrific explanation of what happens to platonic solids and regular polytopes in higher dimensions on Numberphile: https://youtu.be/2s4TqVAbfz4

If we can take a point and move it through space and time, including all the futures and pasts possible, for that point, we can then move along a number line where the laws of gravity are different, the speed of light has changed.

These ten time-space dimensions belong to something called Super-string Theory, which is what physicists are using to help us understand how the universe works.

There may very well be a link between temporal dimensions and spacial dimensions. For all I know, they are actually the same thing, but thinking about it for too long makes my head hurt. If the topic interests you, there is a philosophical approach to the nature of time called ‘eternalism’, where one may find answers to these questions. Other dimensional models include M-Theory, which suggests there are eleven dimensions.

While we don’t have experimental or observational evidence to confirm whether or not any of these additional dimensions really exist, theoretical physicists continue to use these studies to help us learn more about how the universe works. Like how gravity affects time, or the higher dimensions affect quantum theory.

Burritos are my spirit animal. View all posts by Nick Leung

5 thoughts on “Shapes, Fractals, Time &, the Dimensions they Belong to”