Moiré patterns are superimposed secondary patterns created when two static surface patterns are overlaid one on top of the other. By displacing or rotating one or both patterns a new visual pattern becomes visible separate to the geometry of the first two. This moiré effect is created in the eye of the viewer, disparate from the shapes formed by the individual patterns themselves.

Associated mathematical formulas can be used to determine the size and spacing of inferred moiré patterns from a series of regularly spaced overlaid patterns. The beauty of the moiré effect is the illusion of movement created through completely static overlays. This forms a naturally interactive experience for the participant, giving over control to the superimposed pattern through visual movement and rotation.

The video above illustrates the moiré effect in two dimensions by overlaying static linear and concentric patterns, printed on acetate, and manipulating their motion and rotation in order to create a new visual pattern. 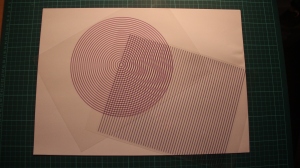 This effect is not restricted to two dimensional patterns but can also be applied in three dimensions. These spatial patterns then utilise the motion of the viewer in order to manipulate the moiré effect. The video below illustrates how three dimensional sculpted elements, set on separate spatial planes can form a visual pattern and take advantage of simple motions by the viewer.

The two primary resultant effects from the physical experiment above illustrate the potential of moiré to create alternate visual patterns and to generate the illusion of movement. These were then applied digitally to create an animation that controls these aspects to create a recognisable representation of motion to the viewer, as opposed to an abstract pattern.

Digital testing of the moiré effect in animation

The above digital animation illustrates the rotational movement of a circle through the movement of a linear overlay, created with the two static images below: 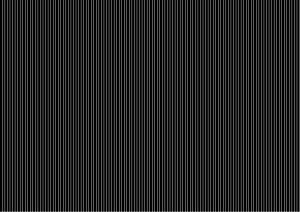 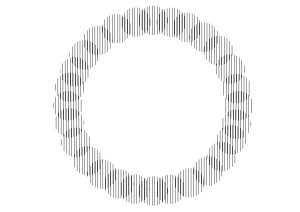 This moiré underlay is created through a series of rules defined by the size of the overlay and the direction, factor and type of movement (linear or rotational). The diagram below explores the rules associated with this specific type of moiré animation.

Rules for defining a moiré ‘underlay’ for linear animation

Whilst primarily a visual effect it is the ability to translate spatially which gives the moiré effect the potential to be applied in a design context, particularly given it’s interactive nature and the reliance on the involvement of participants in order to reveal it’s true beauty.

The video below takes this concept to the extreme, exploring the effects of imagining matter as nothing more than multi-dimensional moiré patterns……

Moiré patterns can be ‘programmed’ using a certain mathematical formula. If two variables are known; the base layer and the desired moiré pattern (in this instance a sin curve) the resultant reveal layer can be determined, allowing moiré patterns to be programmed to any shape.

Moiré patterns work in both ‘positive’ and ‘negative’ constructions. Positive moiré can be classed as additive, constructing patterns consisting of lines to create the effect. Negative moiré conversely removes elements of material (in this instance circles from card) to create patterns when held at a distance. The bottom row of images shows the most successful variables for discerning negative moiré patterns.

The above experiment was digitally reproduced, modelling its negative space in order to understand how the variables of distance affect the reception of pattern.

In order to move from the plane into a spatial exploration of the moiré effect, sin curve gratings were mapped onto the faces of a cube, at varied rotations. The effect is a spatial understanding of moiré patterns when the various faces of the cube overlap. The moiré effect can be created by two distinct methods; a movement by the user, distorting the areas of overlap and the movement of the cube itself, visually shifting patterns.


While trying to figure out useful ways to interact with some wire frame models of 3D Harmonographs, I started exploring some examples of augmented reality software that allows a 3D mesh model to be tracked to a physical marker. The two pieces of software experimented with were the AR Plugin for Autodesk Showcase and LinceoRV. Both are stand-alone render/presentation engines with an augmented reality mode.

I found the Showcase AR Plugin to work well with pre-recorded footage, but not accept my live webcam feed, and LinceoRV to work much better with the live feed, but be more limited on the types of marker that it accepted. Both pieces of software can handle multiple markers.

The software basically analyses a binary [black and white] feed from the film, recognises the marker symbols, and works out their distortion due to perspective. It then uses this distortion to accurately recreate the camera position in relation to the digital model.

Using the LinceoRV software could be an useful way to present/manipulate 3D models that are too challenging/costly to print.

Below are two videos made from the exercises shown at the DS10/Inter9 Grasshopper class at the Architectural Association.

The first video shows the trail left by points constrained by springs, end points and gravity. The Arch moves up and to the side, leaving a beautiful trace which reminded me of the pictures of Edouard Muybridge. It was done with Grasshopper and the free Kangaroo plugin by Daniel Piker.

The second video is a very simple example of recursion using Hoopsnake byVolatile Prototype for Grasshopper: A line rotates on another line and this new line becomes the currrent one on which the rotation is done and so one and so forth. Depending on the angle of the rotation and its location on the curve, these amazing patterns get created.

After researching into our third brief, I became interested in the spaces that can be created by digital media, the internet and social networking.

The internet connects people from all over the world, with many people already experiencing online spaces, such as World of Warcraft, Second Life and even Facebook (to name a few). Although they are experiencing other environments, they are not actually there, it just a screen in front of their face. Will technology advance to the point where you can experience Virtual Reality? And instead of merely clicking on your facebook page and looking at it on a screen, you hardwire yourself to the internet and experience your facebook space in a real, 3D environment. It all sounds a little far fetched, but with every increasing developments in technology it might just become reality.

The video below by Paul Nicholls is very interesting and highlights my thoughts above ‘where the boundaries between what is real and what is simulated are blurred’.

This is a walkthrough of my proposal for an art pavilion at the Burning Man Festival in Nevada. The pavilion is a network of tubes filled with water and a fluorescent dye that slowly travels from a central tank around the woven structure. UV lights housed on steel supporting elements set off the fluorescence. This model was an earlier design and as such has since been refined – a better video of the final proposal will follow.

Please excuse the jerky camera and the very dodgy shadows (I didn’t set a target for the sun direction): this was my first attempt at an animation using Maya. These issues will all be improved on the final proposal animation including the addition of sound and people.

The model was constructed in Grasshopper for Rhino and then imported to Autodesk’s Maya to animate. It was composed in Adobe After Effects.

This is the animation that I developed for my Digirep Module at the University. The story is about an old robot that is brought to life with vibrations. The initial set is of course the Burning man Festival.
Mostly everything is done in Cinema 4D and after effects.